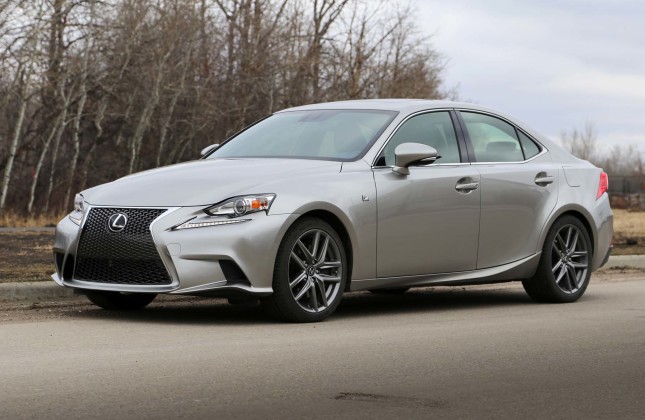 The Lexus IS has been with us for quite a while, and the current version arrived in 2013. The IS 300 is a new trim for this generation, flanked by the also-new IS 200t on the lower end and the top-trim IS 350.

The front end of the IS has become recognizable by its blinding Nike-swoosh LED daytime running lights, which still get my attention every time one drives down the street. The sculpted headlight pods contain bright bi-xenon HID lights.

If you pick the first-tier F Sport Series 1 package (like the one on my review car), you get the very noticeable love-it-or-hate-it F Sport spindle grille (I love it!), an aero package and the sweet 18-inch F Sport rims, which get bumped up to 225/40- (front) and 255/35-sized (rear) boots. By the way, the F Sport package removes the IS’ fog lights.

As you make your way around the highly aggressive-looking front end, you find a much more laid-back side profile and rear end. The side gets that little character line that swoops up out of the side sills toward the rear wheel well, and the rear end gets wrap-around tail lights that come to a very expressive and sharp tip on the IS’ side. I think the tail light signature looks great in the dark. Frankly, I think the whole car looks great.

The IS interior is a pretty dark place, and the few splashes of metallicized plastic trim bits don’t do much to brighten things up. But the fit and finish is world-class, and the materials are beautiful – there are lots of textured soft-touch plastics and nice touches like stitched trim panels on the dash. The design is getting a little dated, but it still works well for the most part. Personally I really like the Goldilocks-balance between space and intimacy that the IS’ cabin provides.

The F Sport package gets quite a few interior upgrades, the key one being the fantastic heated and ventilated F Sport seats, which offer exemplary bolstering and support while remaining very comfortable. It also throws in stuff like the F Sport steering wheel and shift knob, the fully digital instrument cluster (with the somewhat gimmicky movable gauge in the middle), special door sill/scuff plates and a moonroof.

My review car’s media and phone functions were handled by the base system called Lexus Display Audio which gets a decent screen and is managed with a rotary joystick knob rather than the truly awful Remote Touch interface. Considering the eight-speaker audio system is also “base”, it sounded terrific. Other than that, there’s a dual-zone automatic climate control system, universal garage door openers, a remote trunk opener and a smart keyless entry system.

The IS 300’s driver assistance technology was more remarkable for what wasn’t included – it has been a long time since I’ve driven a nearly $50,000 vehicle without a back-up camera or parking sensors, yet my IS came with neither of those. The camera in particular is a surprising omission, since plenty of entry level cars at half the IS’ price come with them as standard equipment.

You will find three seats in back, but really the only two worth mentioning are the two outboard ones. They are reasonably comfortable and at 5’10”, I had about an inch of head room to spare. Leg room and knee room were reasonable for me, but anyone more than an inch or two taller than me will not be comfortable back there. The middle position is useless due to the massive driveshaft tunnel.

Even our three kids were unimpressed with the middle position, and it was always a fight to figure out who had to sit there. There are a couple of air vents, a couple of cupholders in the fold-down armrest and that’s it. You get two sets of LATCH anchors for child seats.

I took the IS on a fairly substantial grocery shopping trip, and found its 310L trunk to be useful. The trunk lid arms aren’t shrouded so you need to be careful so you don’t pinch or outright crush your freshly-baked special-order rye bread. Like I did. The wife was not impressed. Thanks for putting a dent in my happy life, Lexus. Thanks a lot! 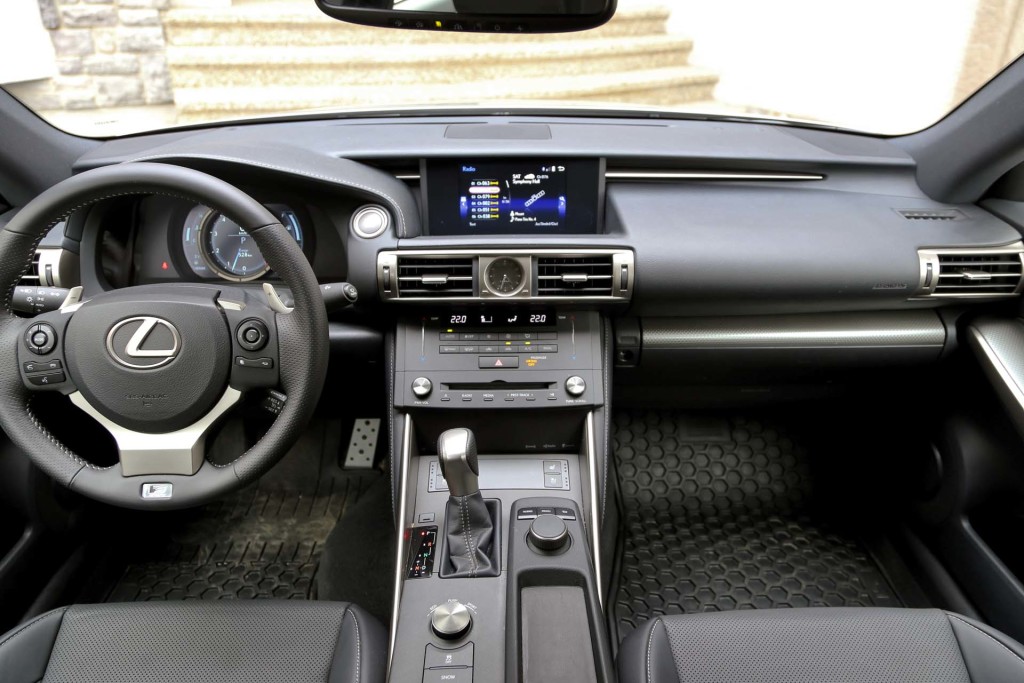 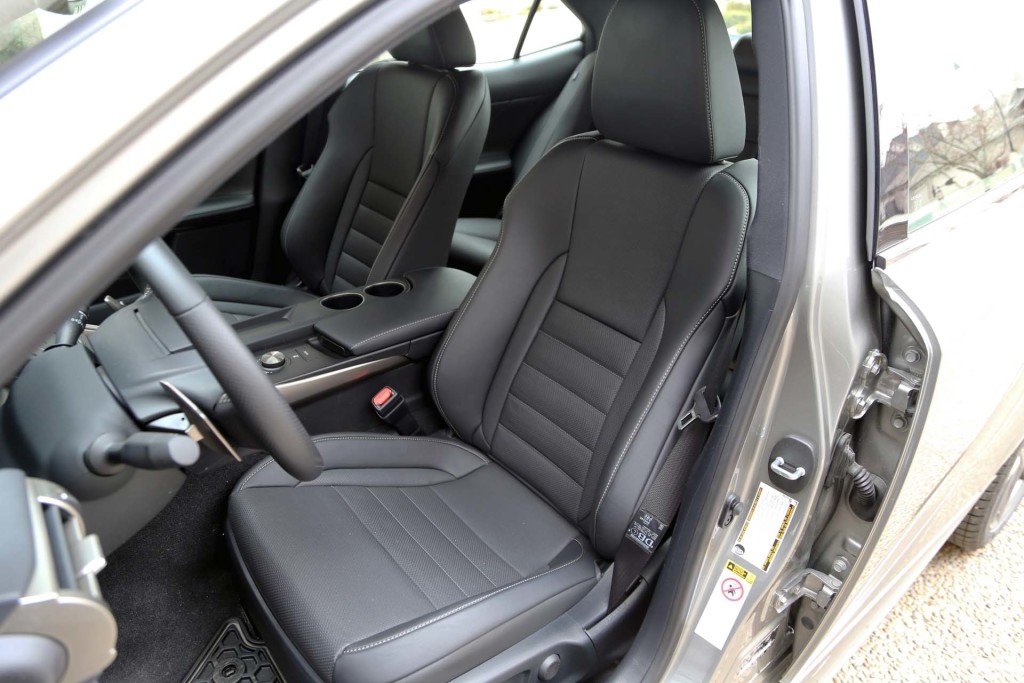 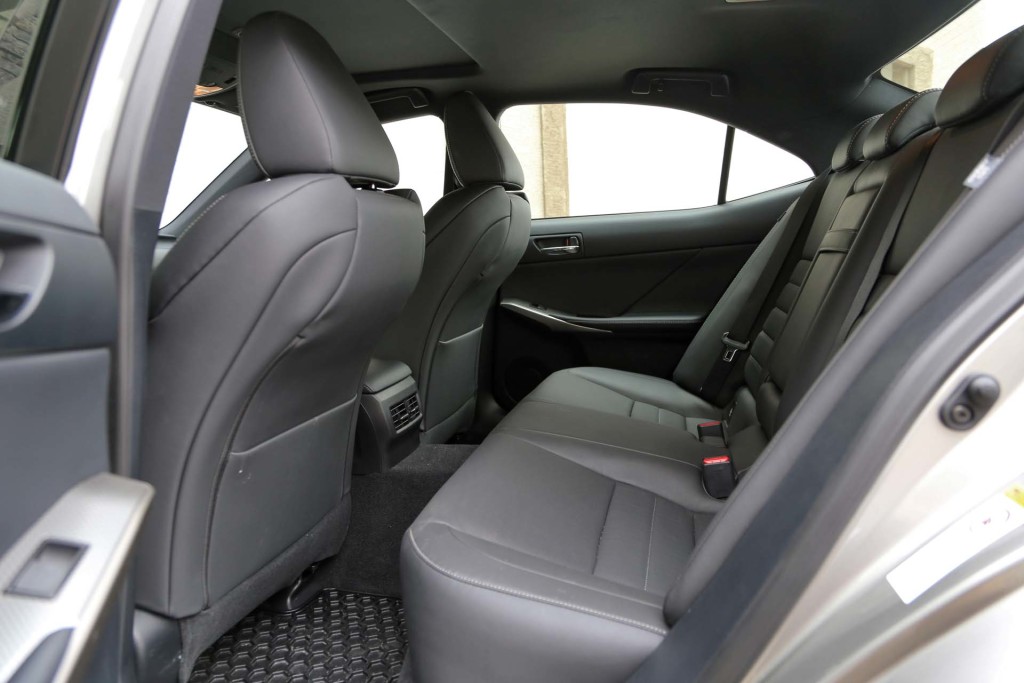 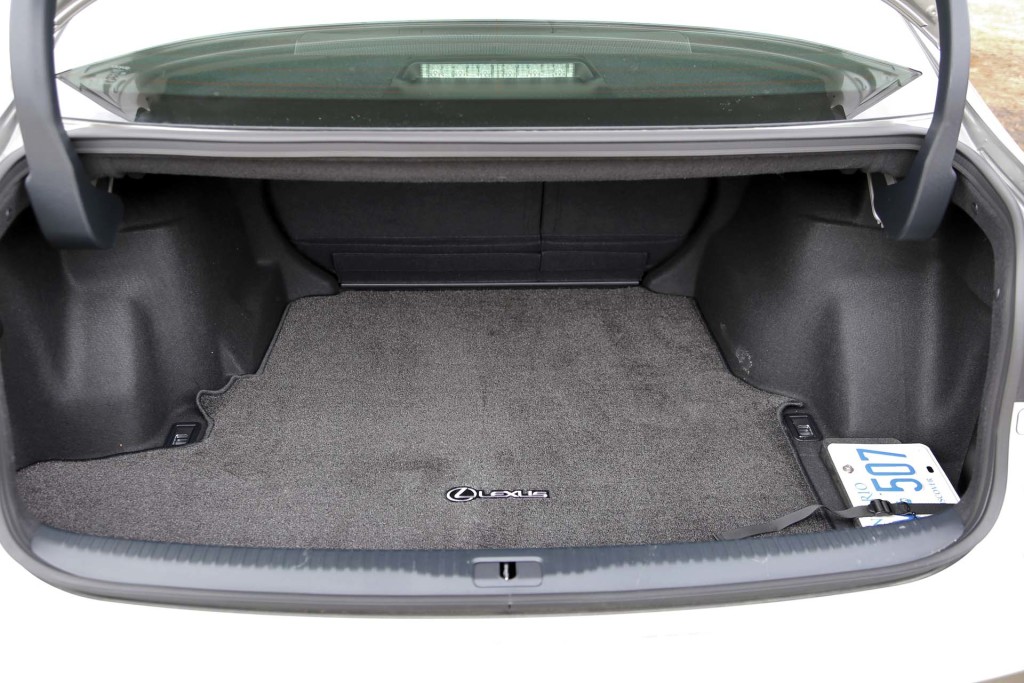 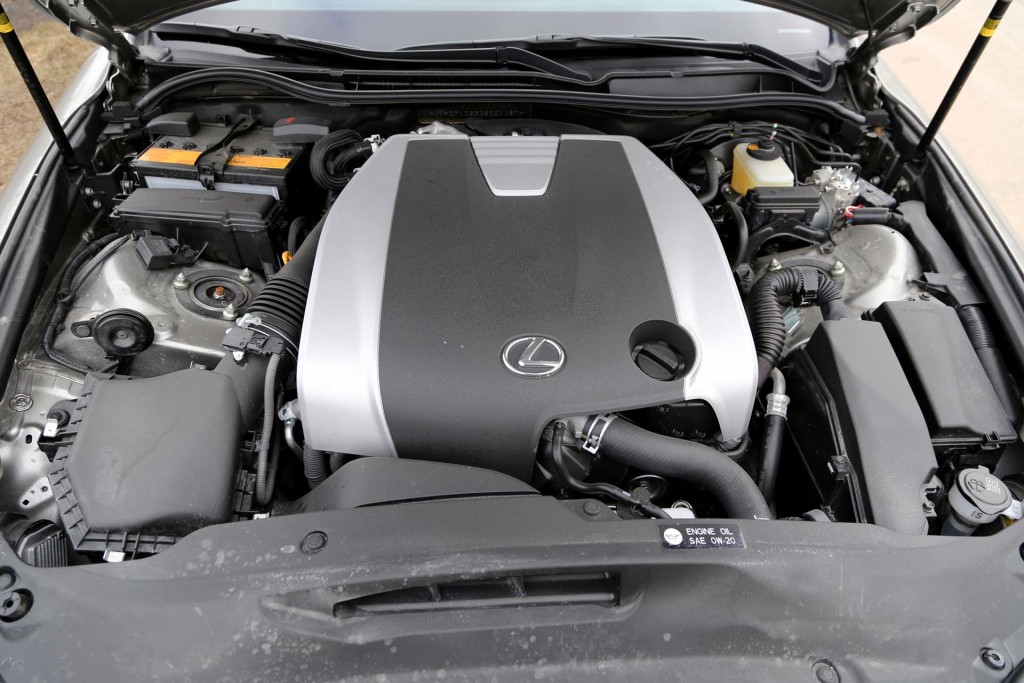 In the no-surprises-here department, you’ll find a 3.5L V6 under the hood, now putting out 255 hp and 236 lb-ft of torque, the latter being available at a surprisingly low 2,000 rpm. The IS 300 gets a six-speed automatic. As you might expect, this 1,695 kg all-wheel drive sedan doesn’t post stellar fuel economy numbers. Lexus rates it at 12.6 L/100 km in town and 9.2 L/100 km on the highway. We ended up with an average of 12.9 L/100 km over the week, which was mostly city-centric commuting, some freeway travel and a quick highway sprint. Not great, and yes, it requires premium fuel due to it’s direct and port injection, which is downright silly considering the Lexus ES’ 3.5L V6 makes more horsepower and torque while swilling regular fuel.

While the IS 300’s numbers aren’t particularly exciting, Lexus is selling it as an improvement on the IS 250 that it is replacing. And so it’s all relative because, in my books, the IS 250 – with its dreadful output numbers, sluggish performance and downright outlandish fuel economy for what it offered in the performance department – had become a turd that couldn’t be polished any more. So yes, by all means, let’s consider the IS 300 an improvement.

Off the line, the increased power is noticeable, and while it’s not a stunner, it is certainly a more rewarding car to drive now. Once you’re on the move and you step on it, you can tell the car’s weight gets in the V6’s way, and the laws of physics take over. But it doesn’t feel slow, which I often felt the IS 250 did. Personally, I think the brand-new IS 200t’s combination of turbocharged engine and eight-speed transmission is a much more compelling package, but of course we can’t get that one in all-wheel drive. Yet. That’s a deal-maker for some, and a deal-breaker for others.

The transmission is still a good one, although it’s starting to feel a bit dated with its six ratios. Its shifts are neither fast nor slow, and it remains smooth under virtually all circumstances. I found that it quickly hunts for higher gears to save you a penny or two in the fuel department. The IS has four driving modes – eco, normal, sport and snow. Sport makes a difference in terms of responsiveness, but I was disappointed that it doesn’t appear to have much of an impact on the transmission’s willingness to play – it shows little inclination to hang on to gears longer, or even to downshift more abruptly in sport mode. You can shift manually using paddle shifters or the gear selector. 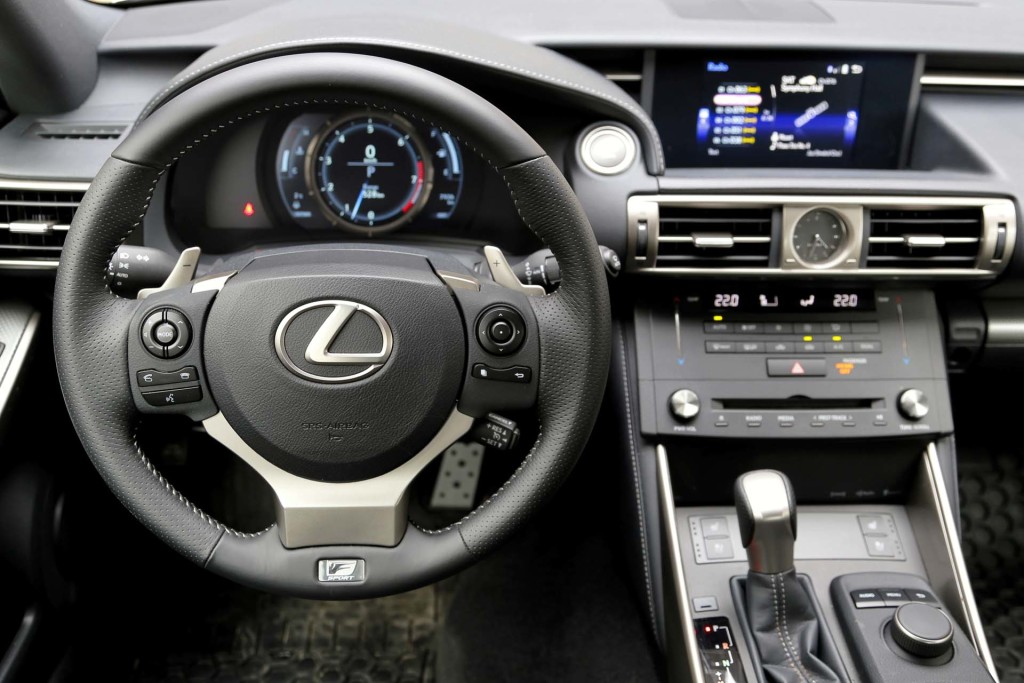 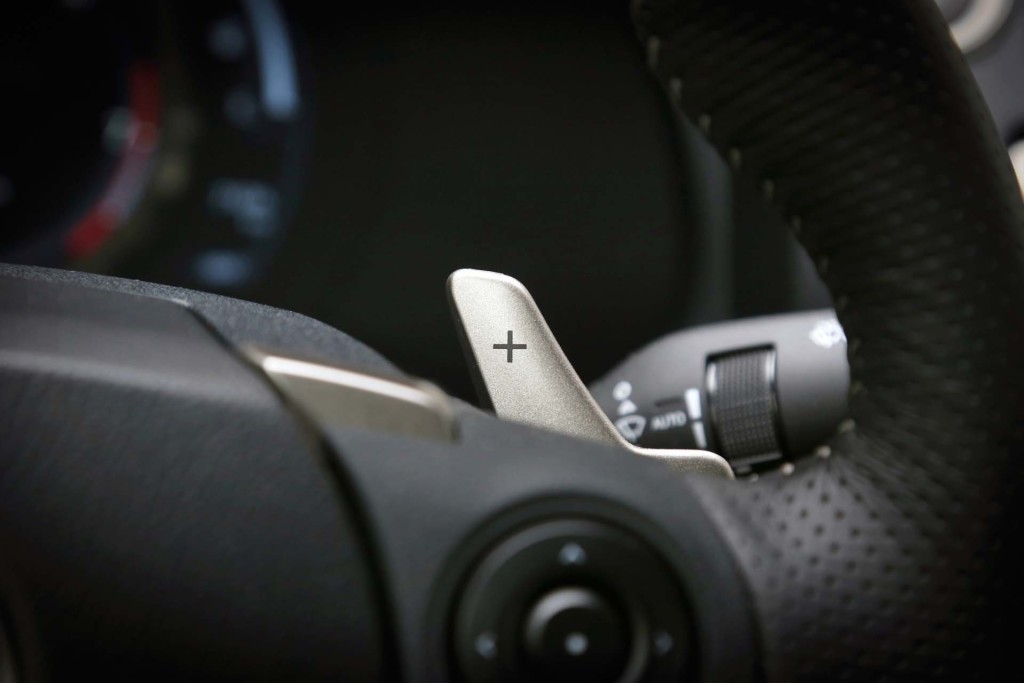 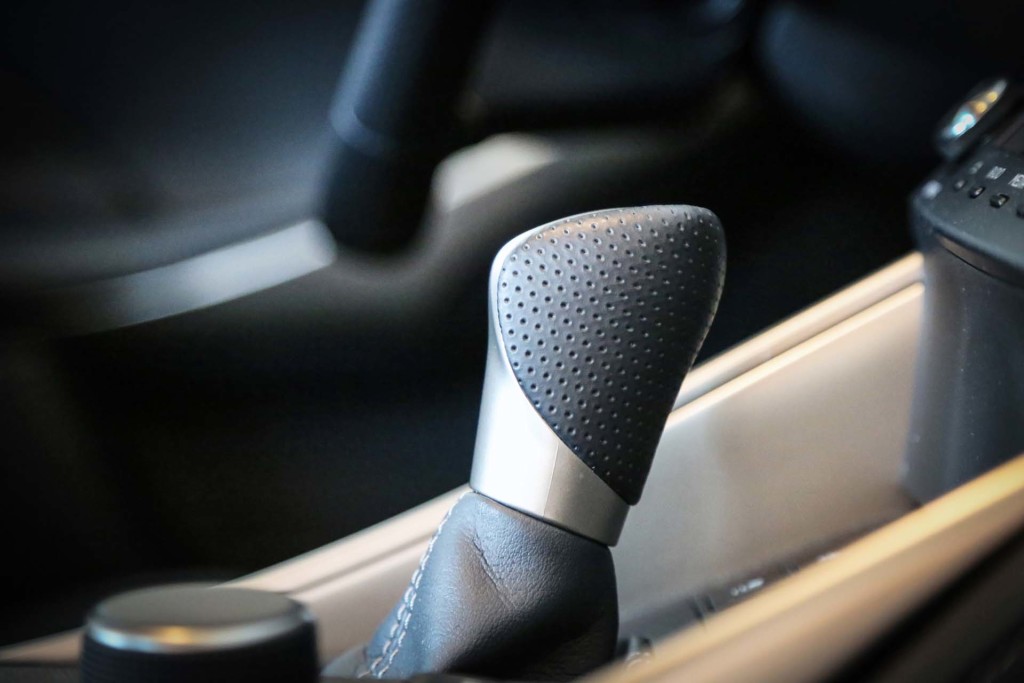 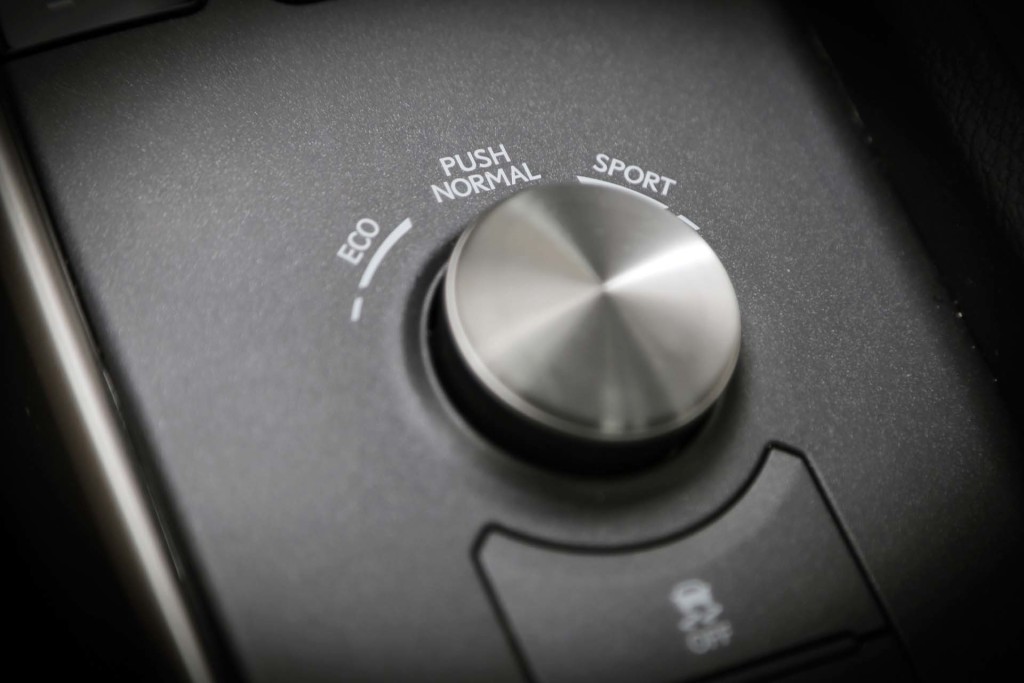 I did enjoy the IS 300’s handling, which always felt competent, predictable and willing, even if it isn’t very playful. The variable electronic steering is well done, although it is a bit numb for a sport sedan. I felt that the IS always comes across as substantial when I’m driving it – it feels planted and a bit heavy. And while the car handles well, Lexus kept the firm ride comfortable enough over all surfaces – it’s a very well sorted suspension set-up and suits the IS and its intended mission.

I enjoyed the low driving position, and the fact that the visibility out of the car isn’t too compromised. The brakes are excellent, and the car is very quiet in all driving situations, including highway speeds. I am happy to report that, although it’s not going to stir your soul, Lexus engineers do allow the V6 to snarl a bit when you step on its tail.

If you’re expecting a truly performance-oriented sedan on the road, you’ll be disappointed in the IS. But it continues to strike a healthy balance between sport and comfort, which is really what most buyers are after.

WAF (Wife Acceptance Factor) was low. She’s a big fan of anything-but-sedans, so that didn’t help. She found it too small for her liking, and wasn’t a big fan of the dash styling and how it all worked. She did however say it felt luxurious to drive.

I was a bit appalled by some of the things left off the standard equipment list, particularly the back-up camera, but you can always add what was missing in Lexus’ numerous option packages. 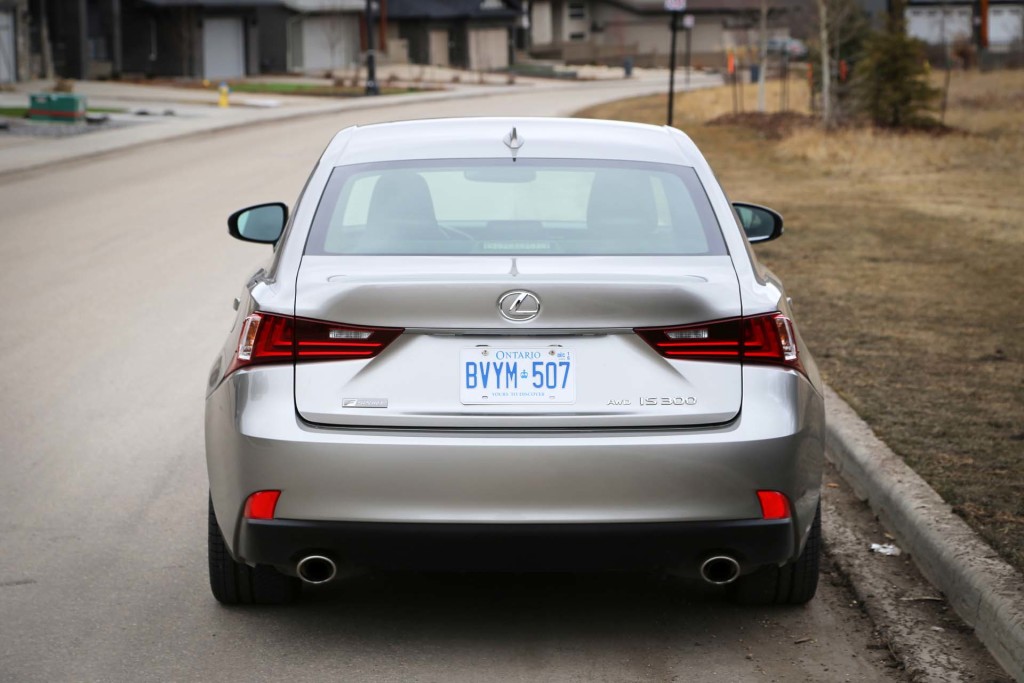 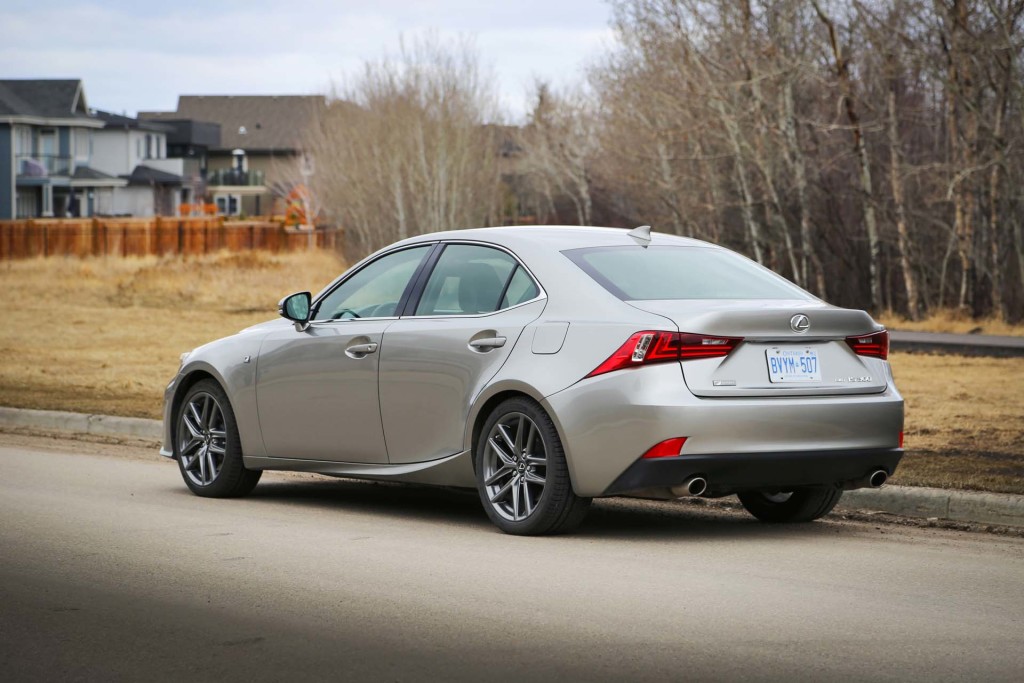 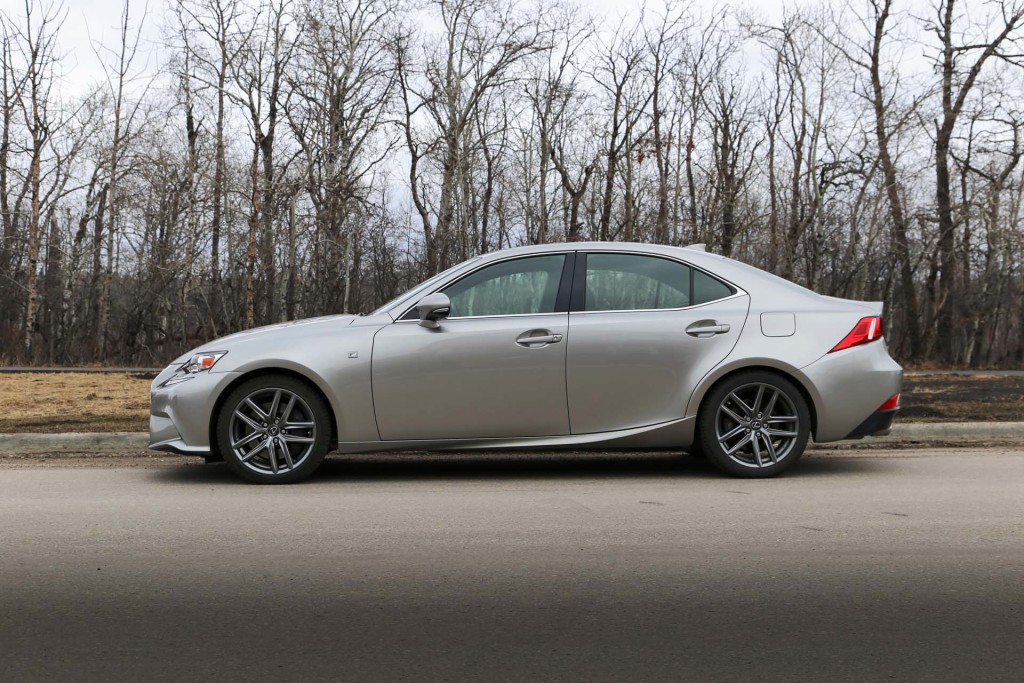 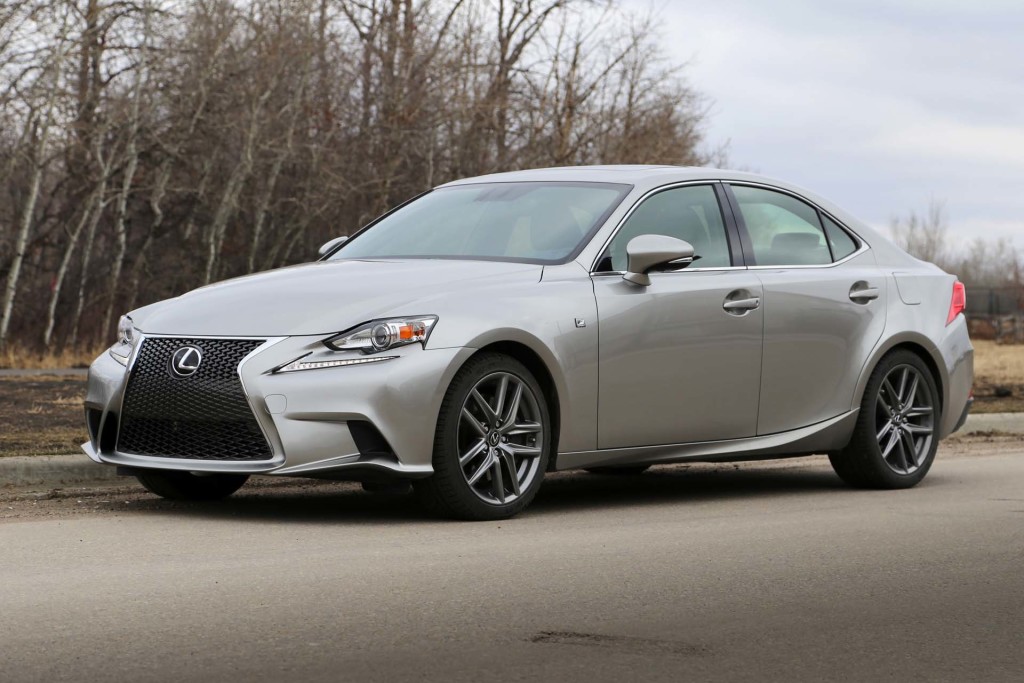 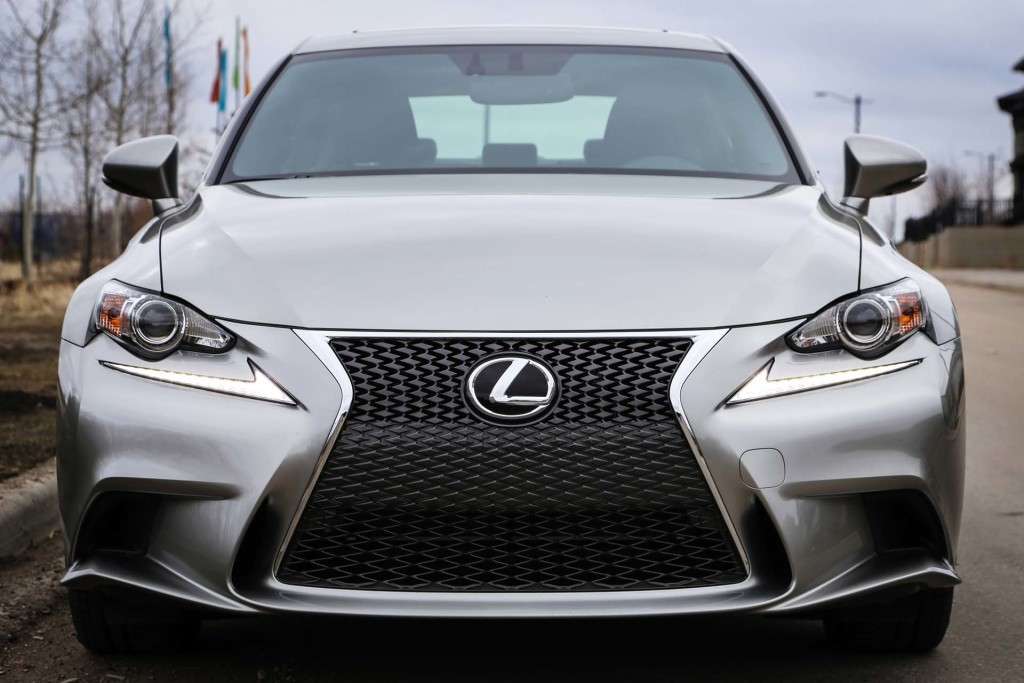 I believe it is the IS’ ability to find the sweet spot in the middle – between looking aggressive and not ridiculous, between performing well enough and providing a good level of comfort – that has allowed it to continue appealing to consumers. And, while not blowing anybody away with any particular facet of its abilities, it is this exact balancing act that continues to impress me. If you’re shopping for a smaller sport sedan, you need to put the Lexus IS on your list. One of its configurations coupled with one of its option packages is sure to check off nearly every box on your wants-and-needs list.