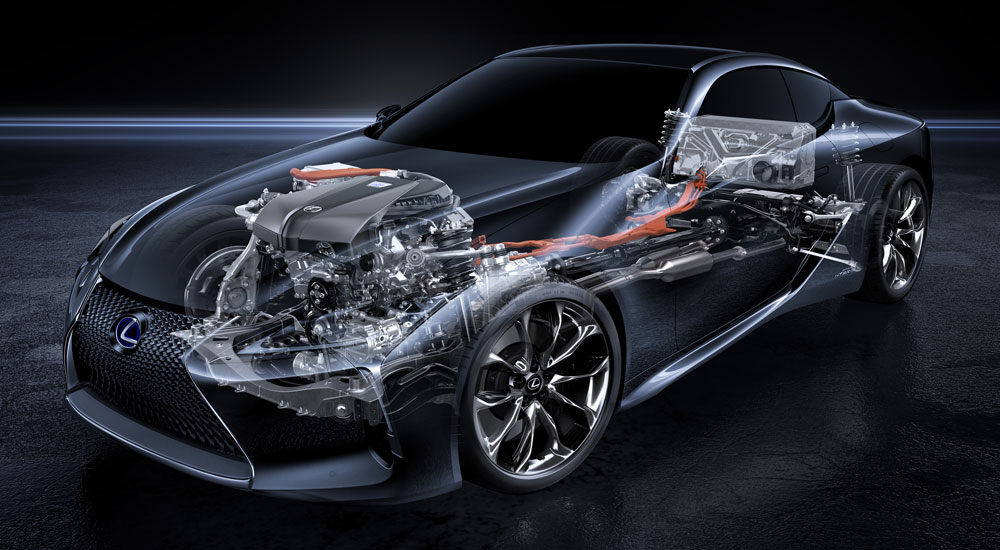 The new Lexus LC 500h will have a radical new transmission, combining the continuously variable transmission traditionally found on most hybrids with a four-speed automatic gearbox — CAR Magazine hasthe best explanation of the new setup:

It does. But when you switch the hybrid over to Manual mode, it’ll act like it’s got 10 gears, too. The electric motor and CVT partnership is able to multiply each of the first three gears in the automatic transmission three times – turning three real ratios into nine virtual ones; the fourth physical ratio acts as an overdrive, enabling the V6 to turn over at much lower rpm when cruising.

In essence, the additional automatic gearbox works in combination with the hybrid system’s CVT to deliver 10 specific gear ratios — Chief Engineer Koji Sato is quoted in saying “the difference between the real gears and the virtual ones is barely perceptible”.

CAR Magazine also has more information on the performance credibility of the new hybrid coupe:

The new system can also cruise at higher electric only speeds (87mph has been suggested, up from 62mph – albeit for only the same short periods as existing Lexus technology) and, more significantly, is able to deploy its power and torque much more rapidly. Response should therefore be much stronger, especially from a standstill; the LC500h will not only hit 62mph in under 5.0sec, it is also capable of breaking traction, so for the first time you’ll be able to smoke the rear tyres of a Lexus hybrid.