Lexus is about to give car lovers innovative driving comfort. Toyota’s luxury division is unveiling their Kinetic Seat Concept.

The luxury carmaker announced last September 15, 2016, that they are showing off their brand new innovation–the Kinetic Seat Concept–at the 2016 Paris Motor Show this coming October, according to Motor Authority.

Toyota’s luxury division was first launched in 1989 and entered the competitive car market with just two luxury sedans—the LS 400 and the ES 250. They became known for their dedication to perfection and for their top-notch customer service, ensuring their spot in the car industry.

The brand is also known for its many innovations in the automotive arena. They have a crash-test system that they call THUMS which they use to test the safety of their cars. They even boast a climate-control system for their cars that they developed for many decades.

Because of those things and other forward-thinking technological developments, Toyota’s luxury brand is now one of the leading trailblazers of the auto-manufacturing industry. Plus, it is stretching its arm to different grounds such as on the hoverboard technology and on artificial intelligence designs. The latter is supposed to be used on their future self-driving mobiles.

Prompted by their dedication to comfort, Lexus chose to highlight their new spider-web seat concept while other automakers are debuting new models. With this avant-garde idea, Toyota’s luxury line is bringing to the table a car seat that molds to the body, and not the other way around. 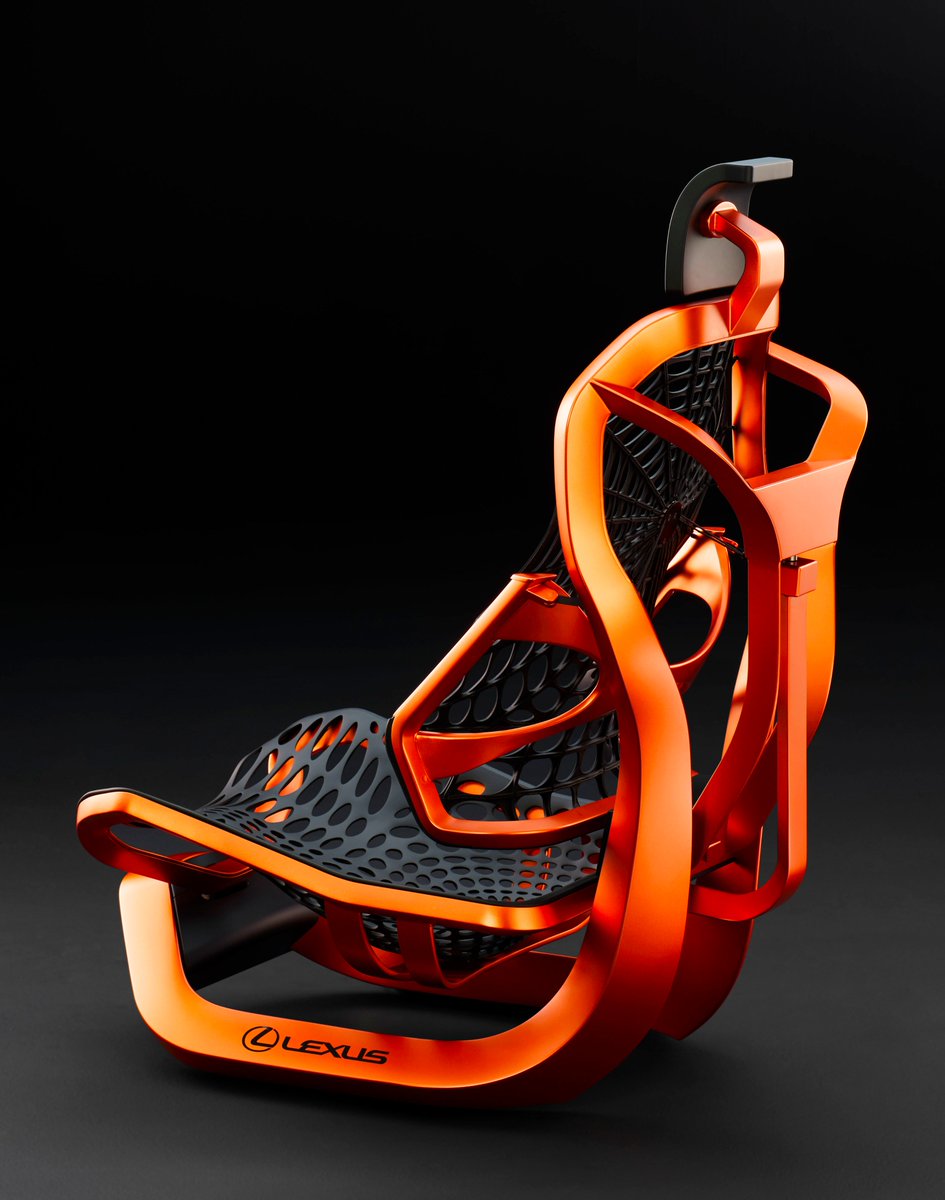 A WORLD OF DIFFERENCE

Car seats over the years have had little design changes. Maybe drivers will get treated to some softer cushion, smoother leather coverings, or a subtle supporting curve.

But not with Lexus. This time, instead of utilizing the usual go-to cushion foam fitted to a hidden frame, the luxury carmaker chose to go with something unusual. For their Kinetic Seat Concept, they opted for a hard-to-miss orange metal frame. It is striking, and it is a work of art by itself.

This car seat does not just introduce a new look, it also debuts a range of functions. Specifically, the new Kinetic Seat Concept was designed to stabilize the head. In order to do that, the seat cushion and the backrest adapt to the position of the occupant through his weight and through exterior forces. And since the head will be stabilized, then the driver’s driving vision will also be held steady.

The idea is similar to a human’s biological make-up and movement—the backrest is the spine and the cushion is the head. To support the head, the spine works with the pelvis and the chest by allowing them to rotate in opposite ways, such as when taking a walk or while doing a brisk jog.

If you have seen the Spiderman movie series starring Toby Maguire, then you might remember that scene in the third installment where Peter Parker and Mary Jane were lying back on a bed of web. They were very comfortable.

The carmaker also promises to treat whoever sits on the spider-web site the same comfort. Its upholstery is out-of-the-ordinary; it’s a pattern of spider-web that culminates from the center (shoulder blade level) with the Lexus logo.

The hammock-like spread’s design function is to be flexible to mold to the body’s contours as described by AutoExpress. This netting will also distribute the body’s weight, to offer more comfort during prolonged driving hours.

Because the seat is composed of light-weight materials, the car’s overall weight will also be reduced.

AN ODE TO NATURE

QMONOSTM is what the web pattern material is called. As part of its efforts to become more environment-friendly, the company used a synthetic spider silk to form the cushion of its Kinetic Seat Concept, foregoing the usual materials that are derived from petroleum.

The creator of QMONOSTM, Japan-based Spiber Inc., says that they got their inspiration from the spider called the golden orb weaver. The synthetic silk they are producing is aptly named too. The stylized Anglicized name was derived from the Japanese word kumonosu, which translates to “spider web”.

Although they could have farmed silk from spiders, Spiber, Inc. opted to make synthetic silk that is still tougher than steel. That is because using spiders to produce tons of silk is time-consuming. Manufacturing it synthetically is also cost-inefficient.

Furthermore, spiders have an innate aggressive and territorial characteristics that make handling them a difficult task.

However, this synthetic silk that makes up a huge part of Lexus’ Kinetic Seat Concept also did not come by easily. Spider silk’s molecular structure is a complex one. Spiber’s scientists had to study long and hard as to how they could synthesize fibroin, the insoluble protein that is a component of spider’s silk.

In the end, they used microorganisms to produce fibroin. Because of the presence of these micro-sized bacteria, the process of synthetic silk creation is called “microbial fermentation”.

QMONOSTM didn’t magically appear from the microorganisms, though. Fibroin had to be extracted from them first and dissolved. Then the thread is spun to turn it into fiber. From thereon, many things, such as Lexus’ Kinetic Car Seat concept, could be created.

MORE OFFERINGS AT THE CAR SHOW

Other than the ergonomic seat, the luxury car maker will also be showcasing new cars including the new Lexus NX Sports Edition and LC, its latest flagship coupe. Its UX Concept car will make a showing as well.

Toyota’s luxury division was first launched in 1989 and entered the competitive car market with just two luxury sedans. But now it is one of the leading trailblazers in the automotive arena.

If you are a car enthusiast and would like to keep yourself up to breast with Lexus, the carmaker will have a conference on September 29, 2016. You can watch an online coverage via LiveStream.