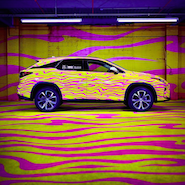 Toyota Corp.’s Lexus is building awareness for its sponsorship role at New York Fashion Week through a mobile advertisement on Harper’s Bazaar.

Touting both the brand’s new RX models and its fashion credibility, the ad catches consumers’ attention with a series of flashing images and text. Lexus first sponsored New York Fashion Week last September, making this placement a means to draw attention to the automaker’s affiliation with the event.

“Lexus has a sponsorship with Elle to promote its partnership with NYFW,” said Brian Bolain, corporate marketing communications and product marketing manager, Lexus.

“The buy is further extended into the Hearst network of sites targeting fashion enthusiasts, which includes Harper’s Bazaar,” he said. “It was important to highlight Lexus’ presence at NYFW to Elle’s audience because of Lexus’ focus on cutting-edge design, as showcased through the newly redesigned Lexus RX.”

Driving attention
Lexus’ ad was featured on the homepage of Harper’s Bazaar’s mobile-optimized site. The ad flips through a sequence of short clips interspersed with text. 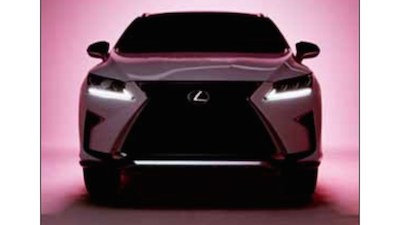 In one scene, the brand’s RX is shown in white sitting in a blank room. Brightly colored lights come up to illuminate the vehicle.

At the end of the creative, Lexus includes a streamlined slide that reads, “Proud partner of NYFW The Shows and Made Fashion Week” in white letters on a black background.

The ad eventually settles on a slide that shows an RX model. Consumers are then given a call-to-action to “discover more.”

If they click-through, consumers will be sent to Lexus’ Send Them a Signal Tumblr, rather than the brand’s Web site.

At the time of the placement, the top content on the Tumblr included images from a photo shoot for the Sports Illustrated Swimsuit issue costarring the RX and model Hailey Clauson. On this social account, Lexus also delves into the filming of its RX television spots.

These ads, part of a new national campaign developed by Team One, position the redesigned RX as the vehicle for the sophisticate.

The campaign includes national and targeted TV spots, including spots made to appeal to particular niche audiences, as well as print media, and aims to show how the RX will serve “customers looking for an SUV that’s as interesting as their dynamic lifestyles.” The niche marketing and appealing spots will likely win Lexus new fans (see story).

For this effort targeting the fashion crowd, the choice of landing page makes sense, as this enables Lexus to show off the RX as if it is the latest accessory. The editorial imagery may feel more familiar to a Harper’s Bazaar reader than a technical page detailing the model’s specifications.

U.S. fashion label Jeremy Scott took a mobile approach to sharing prints from its fall 2016 collection in a fleet of branded Lexus SUVs.

The label, whose namesake designer is also the creative director of Moschino, did not present its fall collection until Monday, Feb. 15 during New York Fashion Week, but the public could get a preview if they were in the right place at the right time. For its out of home placement, Jeremy Scott paired with automaker Lexus to wrap 10 of its SUVs in the brand’s latest prints, which drove around New York on Feb. 11 (see story).

Through its fashion week partnerships, Lexus is able to target both an uptown and downtown crowd.

The space was used by designers and their VIP guests for before and after events during the week of Feb. 12-18. An alternative to New York Fashion Week, Made features runway shows from both up-and-coming and quirky designers, giving Lexus a platform to reach younger, affluent consumers (see story).

“Lexus’ ‘The Signal’ taps into the built-in community of social fashion enthusiasts on Tumblr,” Mr. Bolain said. “The Tumblr imagery exhibits forward-thinking style that is inspired by Lexus.

“Overall, we felt this was a better experience for Elle’s fashion enthusiasts who may not be currently in-market for a vehicle versus directing them to product information on the RX.”