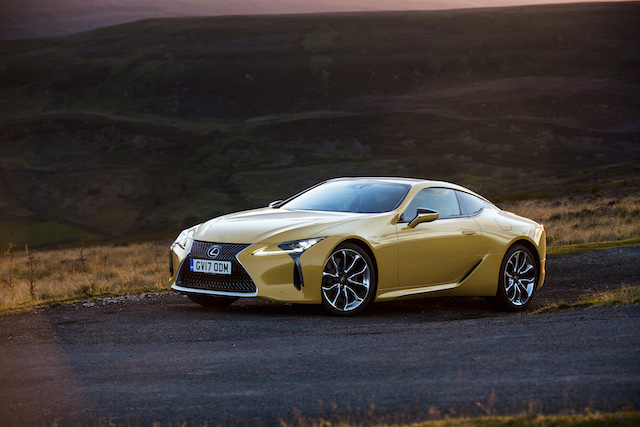 Lexus has added a new flagship to its range with the striking looking new LC. AOL Cars headed to Germany for a test drive to see if it’s worthy of its £76,000 asking price.

The LC is Lexus’ entry into the luxury coupe market and sits at the top of the Lexus range. The Japanese manufacturer has done things quite differently with the LC, which isn’t really targeted against any particular rivals, meaning it is a unique and fantastic-looking proposition.

While Lexus sees those buying the Porsche 911 and BMW 6-Series as its main customers, chief engineer Koji Sato said: “We focused on emotional value rather than specs”. Because of this, direct comparisons are tricky – although this works in the LC’s favour.

What’s under the bonnet?

Lurking under the superbly angled bonnet lies a 3.5-litre petrol V6, joined with a lithium-ion battery in the hybrid, it produces an impressive 472bhp. Lexus claims it’ll return 44mpg, although during our spirited driving adventure on German autobahns and Austrian mountain passes we managed 25mpg. We reckon mid-30s figures should be easily achievable in more relaxed driving.

A 471bhp 5.0-litre V8 engine is also available, which uses much more fuel, although it sounds fantastic.

Few cars have the grand-touring ability of the LC 500h, the seats are incredibly comfortable and the ride is seriously impressive. We can’t think of many others that would be as relaxing on long-distance journeys.

What amazed us the most about the LC was the handling, particularly on windy mountain back roads. For a near-two tonne car to have the dynamic capability it does, is a testament to the LC’s engineering. How does it look?

In short, the LC 500h is absolutely stunning. Lexus unveiled the striking LF-LC concept back in 2012, and no one would have thought the production car would look anything like it, but it really does. To go with the common cliché, the LC really is a ‘concept car for the road’.

Striking daytime running lights, that huge grille and muscular rear arches all give an image of extravagance, which we love. No Lexus – minus the LFA supercar of course – has ever turned heads quite like the LC does.

Lexus interiors have all been quite hit and miss in the past, but the LC is an undoubted hit. The seats offer incredible comfort, the seating position is excellent and the interior as a whole manages to look quirky without being too fussy, unlike some Lexus interiors in the past.

Yet, it still has its problems. While it is a grand-touring four-seater, the rear seats are not ideal, particularly for adults, thanks to its sloping roof line. Our other gripe is the drive mode selector which requires a stretch to use it – not really ideal on a car of this price.

Three trim levels are available – Luxury, Sport and Sport+. In an unusual move by Lexus, the pricing is the same for both the V8 and the hybrid. Lexus has made it clear that it wanted the customer to buy the car they wanted, not the one they could afford.

‘Entry-level’ Luxury-spec cars start at £76,595, and include a range of safety technology, premium-feeling leather upholstery and a 10-inch display with in-built satellite navigation. The Sport package costs £5,000 extra and adds 21-inch alloy wheels, Alcantara seats and a carbon-fibre roof. The Sport+ package costs from £85,595 and you get an upgraded handling kit and rear-steer technology for even sharper cornering.

The LC 500h is one of those cars you just can’t help but love. For those wanting a sportier drive, the V8 is better-suited, although the hybrid is a very well-rounded proposition, particularly when identically priced to the V8.

As a luxury GT car, few things match the LC. It’s comfortable, good to drive and if you opt for the hybrid, shouldn’t even be that expensive to run. Very well done Lexus.