But is this newest member of Toyota’s high-line Lexus brand just another pretty face, or is it a well-rounded machine embodying high performance, high style and high image in one well-turned package? Just take a look and you be the judge.More than skin deep
In line with Toyoda-san’s edict that the words Lexus and boring never be used in the same sentence again, Lexus is back in the business of building front-engined, rear drive sport machines, powered by a variety of drivetrains. In the case of this 2018 Lexus LC 500, it is a two-plus-two grand touring coupe powered by a 5.0-liter naturally aspirated 471 horsepower (351 kW) V8 producing 398 lb-ft (540 Nm) of torque.

Or, it is a more fuel-efficient gas-electric hybrid powered by a 3.5-liter V6 with two electric motors producing 354 (263 kW) total horsepower. The gas and the hybrid models top out at an electronically limited 168 and 155 mph respectively.

Either way, the cars appear the same except for the badging. 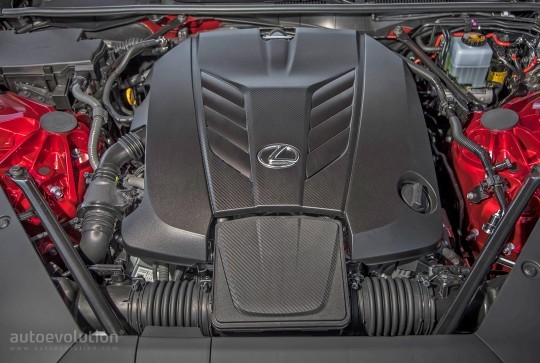 The naturally-aspirated V8 is mated to a “first for the segment” ten-speed automatic transmission that Lexus claims is as fast as some dual-clutch units found in sports cars costing thousands more.

While the LC500 uses a more conventional gearbox, the LC500h runs with a pair, including a Lexus Hybrid Synergy Drive continuously variable transmission and a more traditional four-speed gearbox which works to keep the Hybrid’s 3.5-liter V6 in the sweet spot.

Offering the equivalency of ten gears, the hybrid allows the electric motors to propel the LC 500h to a top speed of 87 mph (140 km/h) before the gasoline engine kicks back in. It did manage to emit a wailing moan when cruising up through the range.

If you were expecting an adaptable air-suspension on the LC500 and LC500h, you would be disappointed. Instead, Lexus has designed the car with a lower driver’s hip point and then matched critical components at the same level and between the two axles for a lower center of gravity.

A multilink suspension provides ride control at both ends with steering handled by an electrically assisted rack and pinion kit in front. An optional rear-steering system is part of the LC’s Performance package and provides the means to shrink the LC’s turning circle or assist in lane change maneuvers. In total, the entire suspension system helps the LC sportscar perform more rigidly than the LF-A supercar.They said it couldn’t be done 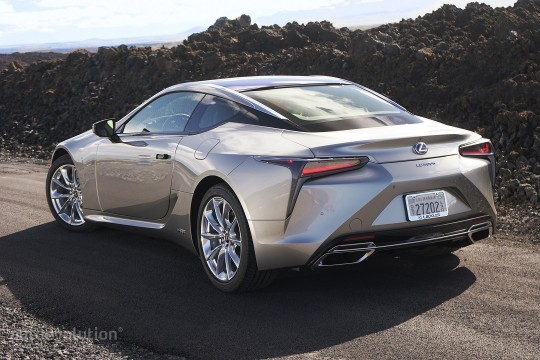 To our eyes, there really is no bad angle from which to look at this car. Form follows function, including a nearly flat bottom for improved aero, and scoops in the lower front fascia that channels air over the outsides of the wheels, both front and rear, similar to the feature also found in select BMW models. Mr. Toyoda asked, “Can it be done? Would it be possible to go all out and make a truly luxurious grand touring sport coupe worthy of the L-logo and the signature spindle grille?” Examine amongst yourselves, and discuss.

Speaking of the spindle grille, we think this is the first time in a Lexus model where the tight-cascading-into-loose grille opening really fits the design, instead of fighting it. The rear fascia mimics the front end as well, to carry on the spindle theme. The hood, fenders and door panels are aluminum. The rest of the exterior uses composites throughout and even has an available carbon fiber roof.

The end result is derived from the entirely new GA-L platform that also forms the underpinnings of the new Lexus LS sedan. Designed with an emphasis on weight and balance, it is built to compete against the likes of the BMW 650i, Jaguar’s F-Type and the Mercedes-Benz S500/550 Coupe.

It manages to fit right in while remaining completely different from the others. Pricing is different, too, starting at $92,000 for the LC 500 with its naturally aspirated V8, to the Hybrid, which checks in at $96,510. In the grand scheme of things, that’s bargain territory.

It’s a front-engined, rear-wheel-drive two+two grand tourer, but let’s be serious: the only thing going in those two rear “seating areas” are pets or a rollaboard suitcase. Truth be told, it’s no different than any other two+two. The interior of the LC is clearly modeled after every late-model Ferrari on the road.

We loved nearly every aspect of the interior including the finely stitched leather that covered the high-performance driver and passenger seats. We did think it came up short with the touchpad interface, which after a full day in the car, continued to confound us. And then there was the LC’s fly-by-wire gearshift control. Leather-wrapped and all, coming from Toyota’s Prius parts bin, it just doesn’t seem a proper fit in a luxury sports coupe.Behind the wheel 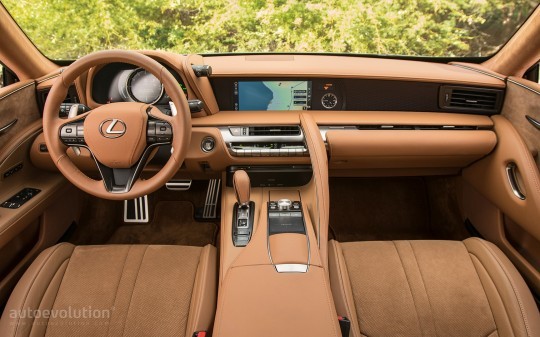 The Lexus LC 500 features the same engine found in the GS-F and the RC-F. Unfortunately in Hawaii, with the roads a little congested and artificially slow, it was tough to really put it through its paces. Still, this car is sonorous, almost F1-like in nature, popping the exhaust notes as you go along.

The closely spaced 10-speed gearbox pops rather quickly through the cogs, getting to the optimal ring in short order. But could this be a case of overkill? We experienced a bit of hunting through the gearbox while cruising around the big island of Hawaii. Just perhaps, in this case, maybe eight truly is enough.

Acceleration is potent in both the Hybrid and the naturally aspirated 5.0-liter V8, with the shifts of the gears holding just long enough to make it interesting. When it reaches the optimal point, a slight backfire is heard offering the emotional appeal that got you interested in cars in the first place, right?

This grand tourer is suitable for most every type of driver. If you didn’t need an Aston Martin, or the beat-you-up boy-racer charm of a Nissan GT-R, and would still like a little bit of cash back from your $100,000, this might be your car. Still, with 400 cars a month slated for sale in the United States, be on the lookout for that Latin species of primate, greedius dealerus.

Lexus intends to go racing with the LC 500 in the IMSA WeatherTech series, as well as other circuits throughout Europe and Asia. Do they possess the goods? After spending a day in the new LC coupes, we think they will do well. According to Lexus officials, the brand is here to leave a mark.