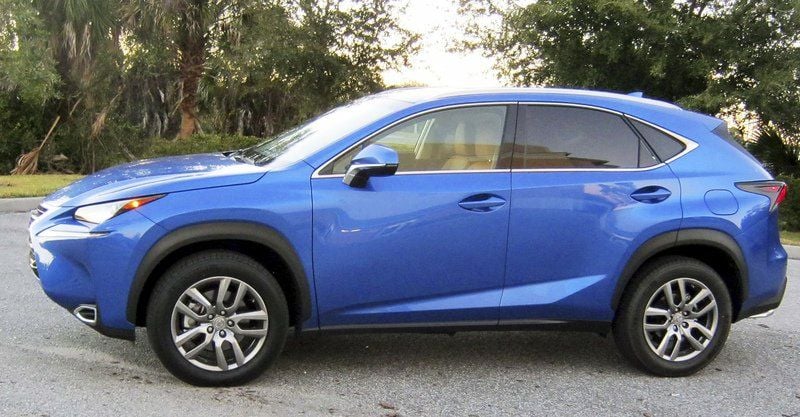 We should have seen it coming. When the newest Lexus SUV hit the market last year, its striking design signaled the way for the new crop of RX models this year. The smaller NX model sent shock waves through the traditional conservative carmaker’s design with its chiseled looks and in-your-face design.

Such a big hit in its first year, parent company Toyota decided to carry over the model with little change. While there is plenty of competition in the luxury compact segment, few have the appeal of the new Lexus. Other models, including the BMW X3, Audi Q5 and Acura RDX, do offer more rear cargo area if space is a deal-breaker.

The NX is offered in two trim levels, the 200t with turbocharged power and a 300h hybrid for the highest fuel economy out there. In addition, an F Sport package can be added for more pizzazz on the outside with an enlarged front stout grille, sportier suspension and paddle shifters with special gauges.

Offering distinctive lines, the NX is unique in its class with standout looks. Its edgy and aggressive face starts up front in a sharp chiseled grille edging out over the bumper with narrow headlamps surrounded by up to 78 LED lights. Innovative fender flares are merged into a diamond-shaped body while a spindle-shaped theme works through rear lenses.

Base price is $34,965.While the turbo version is mated to a six-speed automatic transmission, the hybrid model uses a CVT drive system. The sprint from zero to 60 miles per hour was accomplished in 7.1 seconds with the turbo model, about average for this segment.

Stepping into the NX is a pleasant experience with upscale interior, form-fitting seats that are available in two-tone contrasting upholstery and a comfortable and roomy cabin for front and rear seat occupants. The upper center console displays a seven-inch color screen above large button controls for essential cabin atmosphere adjustments.

The flat portion of the console houses an attractive layout of levers and buttons including a rotary dial for driving mode selection between normal, sport and economy. Interface control buttons are within easy driver reach.

In the superfluous category, there is an available sound control device for the F Sport that pumps artificial engine noise into the otherwise whisper quiet cabin.

Driving the NX is different from what we have grown to expect from Lexus. Gone is the smooth and soft ride, replaced with a firmer suspension and sportier feel. Steering is effortless but firm in cornering, and braking is responsive. The NX connects with its driver in a way that is different from its larger sibling RX — a good thing.

One issue I found with the NX controls is a fussy interface that seems overly touch-sensitive and difficult-to-zero-in on items while driving or parked. While attractive in design, the laptop-like mouse pad seems out of place in an otherwise upscale cabin.

Shopping in this segment should include a test drive in the NX, along with the competition.