The refreshed RX isn’t just the first Lexus to support Android Auto, it’s one of the first vehicles with the new widescreen support. 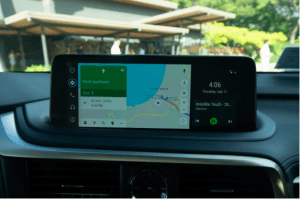 The 2020 Lexus RX 350 and 450h will be the first Toyota/Lexus vehicles to support Android Auto connectivity. But when I plugged in my Pixel XL during an early drive event this week, I was surprised to learn that the RX is also one of the first vehicles that I’ve seen with widescreen support for Android Auto.

Rather than being limited to a 16:9 box, the new software allows Android Auto to better stretch out across the RX’s ultrawide 12.3-inch, 2.66:1 aspect touchscreen, which is now situated closer to the driver on the SUV’s dashboard for easier access and viewing.

On such a large screen, Android Auto uses a split-screen interface. The main area on the left side of the screen is the same, familiar Android Auto interface as before. Look closer and you’ll note that the menu bar for switching between the various functions — phone, media, navigation and home — and apps has been moved to a vertical orientation along the left edge of the screen.

Meanwhile the right portion of the screen is a black box dedicated to displaying the time, date, phone battery level and signal strength. However, this area can also be used to display new multitasking information. For example, when viewing the map, a small box appears here with the currently playing song and play/pause and skip buttons. Toggle to the audio source, and the box displays the next turn for navigation when a destination is set.

However, this still isn’t the all-new, totally redesigned Android Auto interface we were promised back at Google I/O 2019. That interface is still around the corner and features a complete rethinking of app organization and multitasking. What we’re seeing here is sort of a half-step that adds a bit of extra functionality to the current-generation software and solves the biggest nitpick I’ve had with Android Auto since launch: the constant toggling between the map and audio screens.

Lexus representatives tell me that when Google flips the switch for the next-generation Android Auto software (presumably later this year), 2020 RX drivers will be instantly updated to the newest interface. The next big update is still on track for “later this summer,” so I’ll be keeping an eye out for it.