Acura does sporty, Lexus does luxury. That had been a given for 30 years.

But things change. Lexus injected a heavy dose of testosterone into the new ES350 for its 2019 redesign, including an F-Sport option package for the first time. Thus equipped, the ES350 starts at around $50,000, which is in the same ballpark as the Acura TLX in its range-topping SH-AWD Elite A-Spec trim which has the advantage of all-wheel drive.

Acura: Now in its fifth model year, the current TLX is small for a mid-size, about four inches shorter than the Lexus. Refreshed for 2018, it has LED headlights, distinctive body-side sculpting and its grille is assertive but less polarizing than the ES’s. The A-Spec treatment includes body skirts, unique front and rear fascias, a black deck-lid spoiler, dark-chrome accents and 19-inch wheels.

Lexus: Any version of the new ES looks more muscular than before and, love it or loathe it, its signature “spindle” grille is pure Lexus. F-Sport-specific cues include the grille’s black mesh design, larger cut-outs in the front fascia corners, a trunk-lid spoiler and unique 19-inch wheels. The test car’s Ultrasonic Blue Mica paint is a $650 option.

Acura: The Acura has the lowest passenger volume in its class, a deficit noticeable mostly in rear legroom and, to a lesser extent, headroom. Yet, if anything, it feels spacious from the driver’s seat thanks to a low cowl and a range of seat adjustment that should suit all driver sizes. Two screens integrated into the centre console handle navigation, infotainment and connectivity, thankfully still interfaced with a rotary-knob controller, not the horrible touchpad on the new RDX, but we’d still prefer less reliance on the screens for audio and HVAC functions. At least the push-button gear selector works better than most “new-age” shifter alternatives. 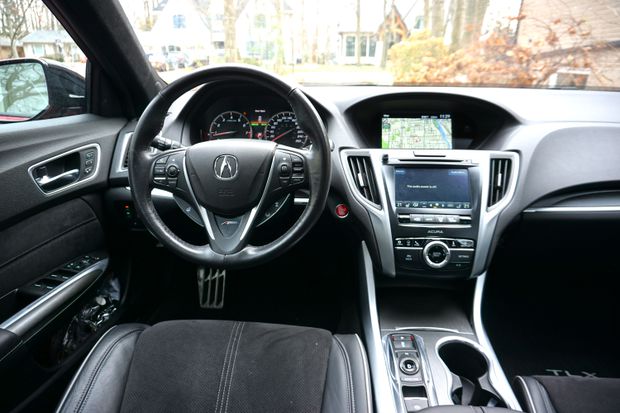 Lexus: Like many new Toyota/Lexus products, the ES seats you somewhat low relative to a tall, upright dashboard made even more wall-like by the free-standing 12.3-inch screen (8.0-inch on lesser models) at top centre. We disliked the haptic touchpad controller (the screen is not touch-control) but fortunately Lexus left plenty of hard-button alternatives for audio and HVAC, as well as a manly traditional shift lever. The digital gauge-cluster can be configured to prioritize different functions, but whichever way you set it, the tacho dominates and the speedo remains digital. Out back, passengers can lay back and sprawl out with best-in-class legroom.

Acura: The TLX may cede 12 horsepower to the ES but it has equal torque, plus two aces up its sleeve: more gears and AWD traction. That combo launches the TLX with a “right-now!” lunge on its way to 100 km/h in 6.6 seconds, while the FWD Lexus would be scrabbling for grip and four-cylinder-turbo rivals would be waiting for boost. The AWD edge counts even on dry pavement, and all the more so when the going gets slithery. Less appealing is the engine’s gruff, seemingly artificial voice that intrudes even when you’re just mooching along. And while the TLX’s much-touted SH-AWD lets you power out of curves with aplomb, it contributes nothing to make the car turn in with more alacrity. In this sportier version, at least, we’d expect much keener steering response to go with its appropriately taut sporting ride.

Lexus: Lexus claims 0-60 mph (0-97 km/h) in 6.6 seconds, which is a few tenths behind the Acura even in ideal conditions. Put that down to the traction deficit at launch. When traction isn’t an issue – for example in passing manoeuvres – we suspect the Lexus is at least a match for the Acura. And whether loafing or lead-footing, we much prefer the ES’s silken powertrain refinement to the TLX’s fake-sounding throatiness. During our early-winter test, the ES’s snow tires blurred its handling somewhat, but it was still clear that Lexus has infused the ES’s steering and chassis – at least on the F-Sport version – with genuine enthusiast-pleasing athleticism. Yet the ride is nicely cushioned.

Acura: The TLX’s two-screen set-up seems a little dated but all the expected functionality is there including CarPlay and Android Auto, a 10-speaker audio with SiriusXM, navigation, the AcuraLink connectivity system and (how quaint!) a CD player. Driver/safety aids include adaptive cruise with low-speed follow, collision mitigation braking, forward collision warning, lane-keeping assist and road departure mitigation.

Lexus: The ES makes things a little more complicated with its Enform App Suite 2.0 that includes traffic, weather, navigation with destination assist, fuel prices and Apple CarPlay … but not Android Auto. Oddly, you need the F-Sport package to get blind-spot and cross-traffic monitoring (they’re standard on most TLX trims), but the ES’s standard safety aids do include full-speed range adaptive cruise, precollision system with pedestrian and bicycle detection, road-edge detection and lane-tracing as well as lane-keeping assist.

Acura: The Acura’s 14.3 cu.-ft. trunk volume is about average among its mid-size peers and while the pass-through is small, the seatbacks lie almost flush with the trunk floor when folded. There’s useful storage below the floor (a tire inflator kit takes up less space than a spare wheel) and there are shallow open trays in the corners of the trunk.

Lexus: At a claimed 16.7 cubic feet, the ES’s trunk is one of the segment’s largest, though frankly it doesn’t look that big. Surprisingly, it doesn’t have folding seatbacks – just a small “ski-hole” pass-through – and there’s negligible underfloor storage. Unlike in the Acura, the gooseneck hinges are exposed.

The Lexus has the Acura beat for the space, comfort and refinement – in short, everything that most luxury buyers want. And yet, with the F-Sport package, it can also put on a convincing display of athleticism – road-conditions permitting. The smaller Acura initially presents as a less refined and overtly sportier option with its taut ride, aggressive engine note and small, tight feel, though its dull steering response is a surprising demerit. The Lexus is a better car overall, but the Acura’s all-wheel drive traction lets you exploit more of its abilities more of the time. Tough call.