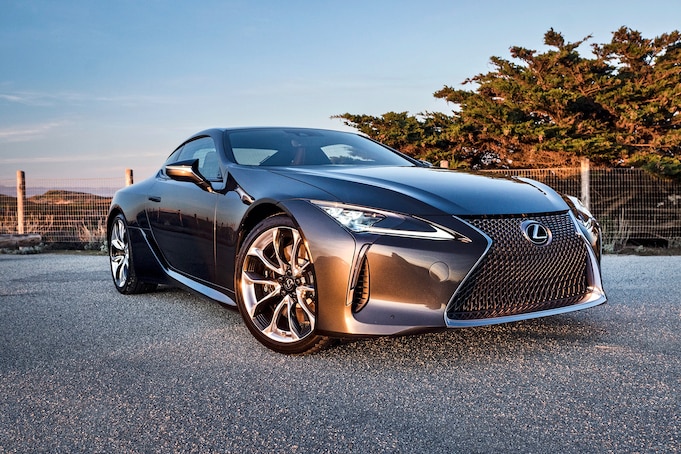 I recently attended the Lexus Performance Driving School at Laguna Seca, my transportation to, from, and during which was an attractive Lexus LC500. The quality alone time with the LC reinforced and confirmed all the reasons we named this grand tourer an Automobile All-Star last year.

The example I drove was slathered in tasteful Smoky Granite Mica gray paint, and it hunkered down over massive 21-inch wheels—those being a $2,650 option. Don’t let the seductive look of this coupe deceive you into thinking it’s all show and no go, however, as strapped under the hood is a V-8 engine with 471 horsepower and the ability to slingshot the LC from zero to 60 mph in 4.4 seconds. If the LC500’s $100K price tag shocks you, I suggest you get behind the wheel of one to experience its lithe handling, refined manners, and absurdly beautiful interior—the price makes sense. In case you’re still unmoved, here are seven more reasons to appreciate this beauty.

Its Driver-Focused Cabin
The driver is the center of attention in the LC500, with the instrument cluster, center stack, and center console all tailored to enhance the driving experience. And it’s the drive you focus on, as the console layout is simple and not overloaded with buttons, and the gauges all easy to decipher at a glance. Unique stylistic touches like the control knobs on the instrument shroud, the frameless door pulls, and the sweeping lines on the door panels put this Lexus in a league of its own.

At speeds below 50 mph the rear wing doesn’t show itself much, but once you stomp on the throttle, the wing extends to increase downforce. That improves the car’s balance and enhances handling at higher speeds. The wing retracts again when your speed drops below 25 mph.

The Naturally Aspirated V-8 Engine
As editor-in-chief Mike Floyd puts it, the LC’s eight-cylinder may not break your neck when you punch the gas pedal—it is plenty punchy, however—but there aren’t many automakers that offer models with non-forced-induction V-8s these days, and that’s what makes it special.

Its Stance
The stance and proportions of this grand tourer are perfectly calibrated to draw eyeballs. The stance in particular, as noted by Automobile design editor Robert Cumberford, “is enormously enhanced by the subtle shaping of the bottom of the body.”

Mark Levinson Audio System
Included in the Touring package, the 13-speaker Mark Levinson audio system offers a fidelity of sound rare in a car—at least those we’ve heard lately—and its clarity at even high volume is sure to bring out the best in your favorite music.

Trunk Opener Button
Yes, something this simple makes the car feel more special. After plenty of exposure to the LC500, I thought I knew everything about the car—until I couldn’t figure out how to open the trunk from the outside. Then I discovered the elusive button is embedded in the right taillight, all the better to preserve the clean look of its rear end.

Exhaust Sound
Whenever I had the chance—romping down an on-ramp, sprinting between stoplights, sitting still in a parking spot—I laid into the gas just to hear the exhaust at full throat. It has an aggressive, menacing edge even just off idle, but at wide-open throttle it simply sounds triumphant.