Automakers tend to ply us car mags with high-end versions of their cars, the goal being to dazzle us with powerful engines and sophisticated techno-wizardry. It’s rare for them to send over a low-spec car, but it does occasionally happen, and it often works out well for them. Case in point: The Lexus RC coupe. I’ve never been a huge fan of the top-of-the-line RC-F, but I’m really happy with the RC 300 I drove this past week.

To be fair, our test car wasn’t exactly a base model; a hefty list of options brought its $41,635 base price up to nearly $51,000. But the RC 300 is the least-expensive and least-powerful model in the RC series.

Wait a minute, you might say if you were willing to script your inner monologue to the needs of my story, isn’t the cheapest RC the 200t? Not anymore. Up until last year, the four-cylinder 200t was the entry level model. For 2018 it’s been replaced by the RC 300 RWD, which gets the same 2.0T engine and rear-wheel-drive. However, it’s not to be confused with the RC 300 AWD, which gets a 3.5 liter V6 and all-wheel-drive. And then there’s the RC 350, which also gets the 3.5 liter V6, but a more powerful version—311 hp instead of the RC 300’s 260—and is available with rear or all-wheel-drive. All of which leaves me wondering which Lexus product planner tripped and hit his head on the conference room table. 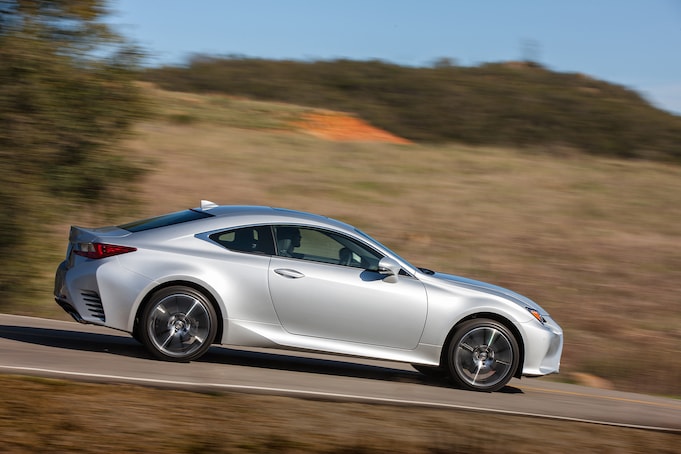 So, let’s get back to our more-or-less base-model RC 300, which I found to be an extraordinarily pleasing car. What can one expect from an entry-level luxury coupe? It has to look good, it has to be reasonably comfortable, and it has to provide some modicum of driving pleasure—but not so much that it embarrasses the pricier go-faster models. The RC 300 checks all three boxes.

Let’s start with the looks. I know, I know, the Lexus spindle grille is a matter of contention among car buffs. I can’t say I’m a fan, but like a leg that aches when it rains, I’m getting used to it. Beauty is in the eye of the beholder (how’s that for a catch-all cop-out?), but overall I like the way the RC looks—bold, aggressive, and purposeful.

I like the RC’s interior styling as well, though I cannot say enough nasty things about Lexus’ Remote Touch interface, which requires you to stare at the center screen while diddling a touch-pad with your finger, when in fact you should have your eyes on the road and your hands on the wheel. Thank goodness this wretched thing is optional. The RC does have good redundant controls for the stereo and air conditioner, including nifty touch-sensitive slide panels to control temperature. They’re fiddly but worth it for the cool factor. 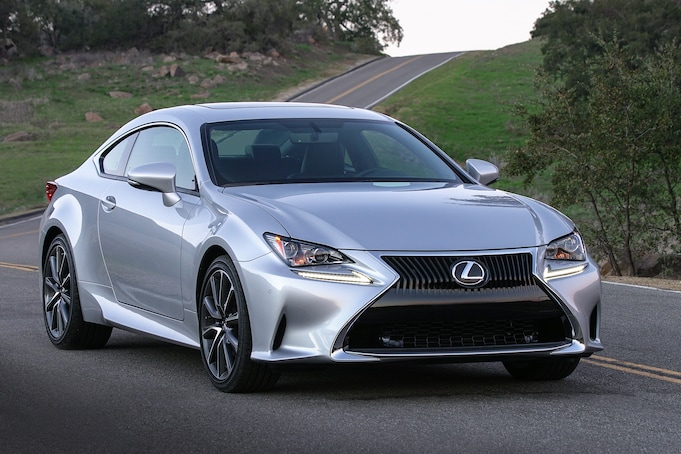 Comfort: Yep, the RC has that too. The RC has a classic low-slung sports-car seating position, with supportive seats and a reasonable amount of headroom. (Up front, that is. Forget about the back seat, which is cramped and nearly impossible to get into for those who cannot dislocate their hips at will.) Spared from the need to provide track-worthy handling, the RC delivers a comfortable, compliant ride that keeps you in touch with the road without reminding you of every single bumpy detail.

And that brings us to the most important bit: Driving dynamics. The RC 300 RWD packs a 241 hp four-cylinder turbo engine backed by an eight-speed automatic transmission. There’s a bit of turbo lag from a dead stop, and the 7.3 second 0-60 time (Lexus’ figure) won’t set the streets afire. But like most 2.0Ts, the RC’s engine has a nice solid mid-range, with its 258 lb-ft torque peak available from 1,650 to 4,400 RPM. The eight-speed automatic isn’t exactly Johnny-on-the-spot for part-throttle downshifts, but if you use the standard-fit paddle shifters, it’s easy to keep the engine on the boil. It’s hard to say much about the soundtrack, since the RC’s cabin is pretty quiet.

In the interests of journalistic integrity, I took the RC for a fast run on my favorite curvy canyon road. I wasn’t expecting to be blown away; in fact, given my previous experiences trying to hot-shoe Lexus products, I was rather expecting to be bored to tears. But the RC 300 impressed me: The grip from the optional summer tires is modest, which I consider a plus. (I like a car that lets go a little early so you can play with it a bit). The steering isn’t great; it feels okay just off center but the effort loads up quickly, drowning out much of the feedback on offer. But the chassis is surprisingly well balanced, and it’s happy to rotate if handled correctly. Even if you leave stability control on—never a bad idea—there are still precious quarter-seconds where you can feel the car transitioning between under- and oversteer. It’s a good way to fine-tune your driving technique while lowering the risk of chucking yourself and your Lexus into the trees. (Besides, the fact that the stability control system cuts in so quickly makes it feel all the more naughty. Don’t small victories taste sweeter under the yoke of tyranny?) 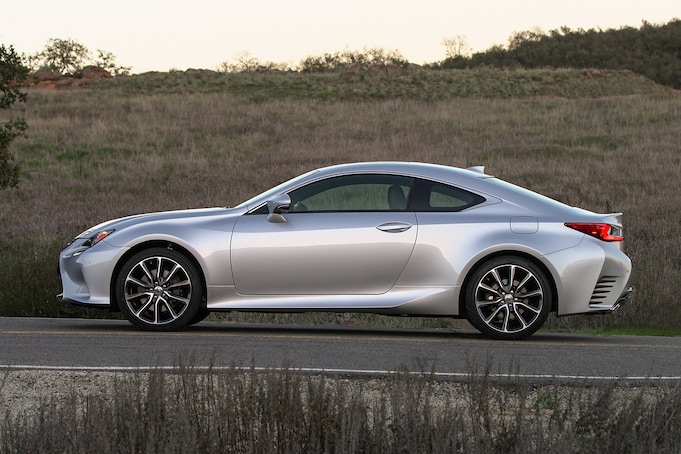 Clearly, I enjoyed my time in the not-quite-base-model RC 300, and one might reasonably ask how much those $9,500 worth of options might have affected my opinion. Let’s go to the Monroney: $795 of that total went to 19” wheels and summer tires. Yes, I’d want those. Other optional bits included LED headlights and fog lights (pass), a luxury interior upgrade package (I could live without it, though I’d miss the rain-sensing wipers and power-adjustable steering column), a trunk spoiler (definitely pass), navigation with Remote Touch (oh, God spare us all, please pass), and a few other odds and ends. In theory, I could get an RC with a $42,160 sticker price that would make me just as happy.

$42,160 is a nice number. It’s $1,600 cheaper than an entry-level Audi A5 and $3,600 less than an entry-level BMW 430i coupe. Granted, both of these cars offer manual transmissions as opposed to the RC’s standard-fit automatic, which could be an advantage or a disadvantage depending on your priorities. (For me, manual=better.) Both of the German cars are a bit better to drive in the curves, though the front-drive A5 offers less tail-happy hoonistic opportunity, and both offer better (optional) infotainment systems. Still, considering how much car you get for the money—and the added bonus of Lexus’ proven long-term reliability—I think the RC is an impressive car. Lexus, you ought to send the cheap stuff to us more often.