Lexus UX compact crossover is bigger than it looks 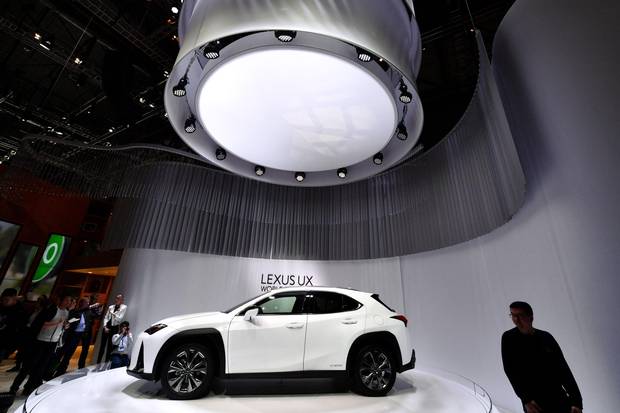 The UX may have been designed as a small vehicle, but there’s a lot more to it than its size.

Lexus introduced its new UX compact crossover here at the Geneva auto show. It shares a platform with the Toyota C-HR, but if you think it’s just a gussied-up version of it, Chika Kako will call you out.

And don’t let its small size fool you – like Kako herself, it’s a lot more than it first appears.

“There is a common architecture,” says Lexus’s executive vice-president and chief engineer, “but we implemented more use of aluminum for the door panels and the hood and more, to lower the centre of gravity, as well as laser-screw welding and additional special adhesive to enhance the rigidity.”

She says that approximately half of the chassis components are different from the C-HR. This is to boost the UX’s appeal as a “creative urban explorer.” The crossover rides lower by 55 millimetres and is intended to give a much sportier drive than the Toyota.

Kako is not a tall woman, measuring just 5 feet 3 inches tall, and she says the UX was designed from the outset as a small vehicle that will fit all shapes and sizes of passengers, including people as small in stature as herself.

“Even I can sit in the UX’s lowermost position, and I can still see out with full visibility,” she says, even though the seat is also 55 mm lower than the seat of the C-HR. The instrument panel is low and the A-pillars are slim, all to help smaller people see better down the road. This is a characteristic shared with the Lexus CT that she previously engineered.

“With a compact car, you have to be relatively creative to utilize all the spaces. For example, in the CT, the armrests were a little too short to cover drivers and passengers who are not so tall, so this time, I wanted to make sure the ergonomics are user-friendly for everyone.”

The UX is shorter than a Toyota Corolla, measuring less than five metres from front to back, and like the C-HR, has a very tight turning circle of 5.2 metres. This makes it simpler to manouvre and park in the city.

The engine is much more powerful, though: the hybrid model creates 178 horsepower, which is up 34 horsepower from the C-HR. The suspension is specially tuned for a sportier drive, too.

There will be two powertrains available, as well as F-Sport versions of each. Both use a new 2.0-litre gas engine designed for optimal thermal efficiency – like the Prius, its efficiency rating is about 40 per cent, meaning it wastes only about 60 per cent of its heat, which is the best in its class.

The really clever technology is found in the transmission, which is known as a Direct-Shift CVT and is adapted from the sporty and expensive Lexus LC 500h. It combines a regular gearbox for the lower gears with the belts and pulleys of a continuously variable transmission, so you start off in a true first gear but once under way, switch over to a CVT.

This makes for a quicker start from standstill but with smoother performance and better fuel efficiency at higher speeds. It’s supposed to feel better, too, and the F-Sport will even throw in artificial shifting noises to sound as if the car is shifting with a regular transmission. But it isn’t.

The huge front grille will probably alienate some potential owners, but inside, the UX is designed to be driver-centric. It offers a new trim finish that’s intended to mimic Japanese paper and traditional quilted leather upholstery, and Lexus says the shorter distance between the driver’s hips and heels is supposed to mimic the feel of driving a hatchback instead of an SUV.

The UX is a global model, destined for 80 countries. Pricing for Canada will be confirmed closer to its release date at the end of this summer.