The 2018 Lexus LC 500 is the latest and greatest sports coupe from Japan. The 471-horsepower luxury spaceship looks like something straight off the auto show floor. Few cars have made the transition from concept to production with so little change, and unsurprisingly, the LC gets plenty of attention. While sports cars are great on winding roads and flat-out around a racetrack, the compromises in pursuit of performance can show when you actually try to live with one every day. That said, a car that pulls at your heartstrings can be forgiven for a lot.

SENIOR GREEN EDITOR JOHN BELTZ SNYDER: On my night with the Lexus LC 500, I was tasked with picking up my toddler, Wolfgang, from daycare. I wondered if I’d even be able to shoehorn the child seat into the coupe’s tiny rear row. I moved the front passenger seat up as far as it would go and folded it forward, unclipping the seat belt from the shoulder strap holding it in place. I was able to get the child seat in its rear-facing position (my son’s not quite two years old), and was happy to see that the LC had latch brackets, which made installation a little easier. I had to leave the passenger seat moved up and leaning forward, but the child seat fit properly.

When I escorted Wolfgang out of daycare and to his ride, he said “Crazy car, Papa.” Then I had to climb in the rear seat on the driver’s side to clip him in. Totally worth it, though. He loved the car, and wanted to check it out more completely when we got home.

And the LC 500 got a lot of looks from other motorists. Rubberneckers slowed down to check out the car on Woodward, and lingered as they passed me on the highway. The one thing I couldn’t share with them was the full song of the car’s 5.0-liter V8. Only in a couple instances when I was alone on a clear, country road could I mash the right pedal to enjoy the throaty sound of the exhaust as the engine revved to the top. In regular traffic, with a 10-speed automatic transmission keeping the revs low, the sound is much more subdued. 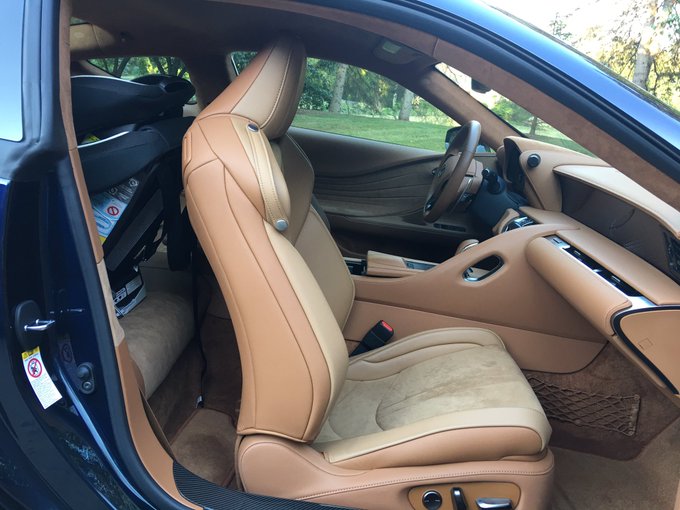 EDITOR-IN-CHIEF GREG MIGLIORE: The LC 500 is one of the most drop-dead gorgeous cars I’ve driven this year. It’s simply a stunner. The curves, the angles, and the creases all work in harmony to create the rare design that’s busy yet also cohesive. Everything plays a role, even if it’s a bit over the top. It attracts a lot of attention. Children on bikes rubbernecked. Evening walkers cast curious glances. A guy in an old pickup almost sideswiped me as he gawked while taking the corner fast. It’s a celebrity car. It also sounds good; the 5.0-liter V8 growls and rumbles. Style and muscle. An excellent execution. I miss the old LFA – which served a different market segment – but the LC 500 is a nice halo for Lexus. 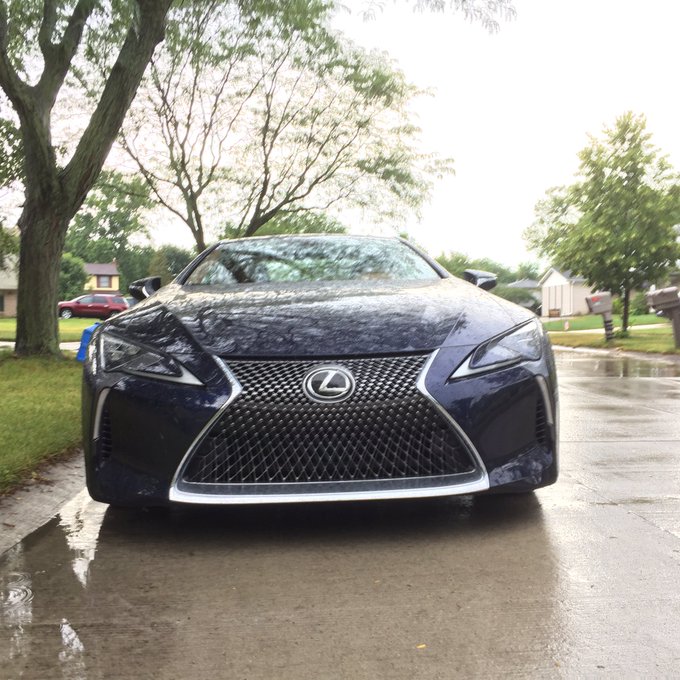 ASSOCIATE EDITOR JOEL STOCKSDALE: This thing is seriously sweet. I already loved the design of it. It looks just like the concept. The gorgeous details like the infinity mirror taillights, and the swoopy lines of the interior are all even better up close and personal. I noticed cool touches that I hadn’t before, like the lights for indicating the locks, rather than actual tabs or buttons. And virtually every surface is swathed in leather or suede. The super low driving position feels great, too.

And the beautiful body is backed up by the driving experience. That V8 is marvelous. It roars and bellows in all the right ways, and it just pulls harder and sounds better as you take it up the rev band. And when downshifting manually, the engine blips so you can hear it all again as you slow to a stop. Don’t just take my word for it, though, a guy in a Jeep Cherokee told me that it looks fun and “it sounds even more so.” Toss in quick, responsive steering, restrained body roll, and a smooth ride — and you have an incredible grand tourer.

This car genuinely feels like something special, so much so that I think that Lexus could charge more for it and it would still feel like an appropriate amount of money. Of course, going much above its roughly $100,000 price tag would probably make it tough to attract new buyers, since Lexus doesn’t have the sports or GT reputation that Mercedes and Aston Martin have. Oh well, this just means there’s a better chance I’ll be able to pick up a ‘cheap’ one in 20 years or so. Maybe.