Lexus LC 500: Lexus Quality In A Stylish Suit of Clothes

Lexus LC 500 coupe are straightforward. LC 500 rates among the two or three best-looking Lexii, ever. Alongside the LFA V10 supercar and the first GS sedan, which was an ItalDesign effort, the LC 500 rates a handsome piece of work. 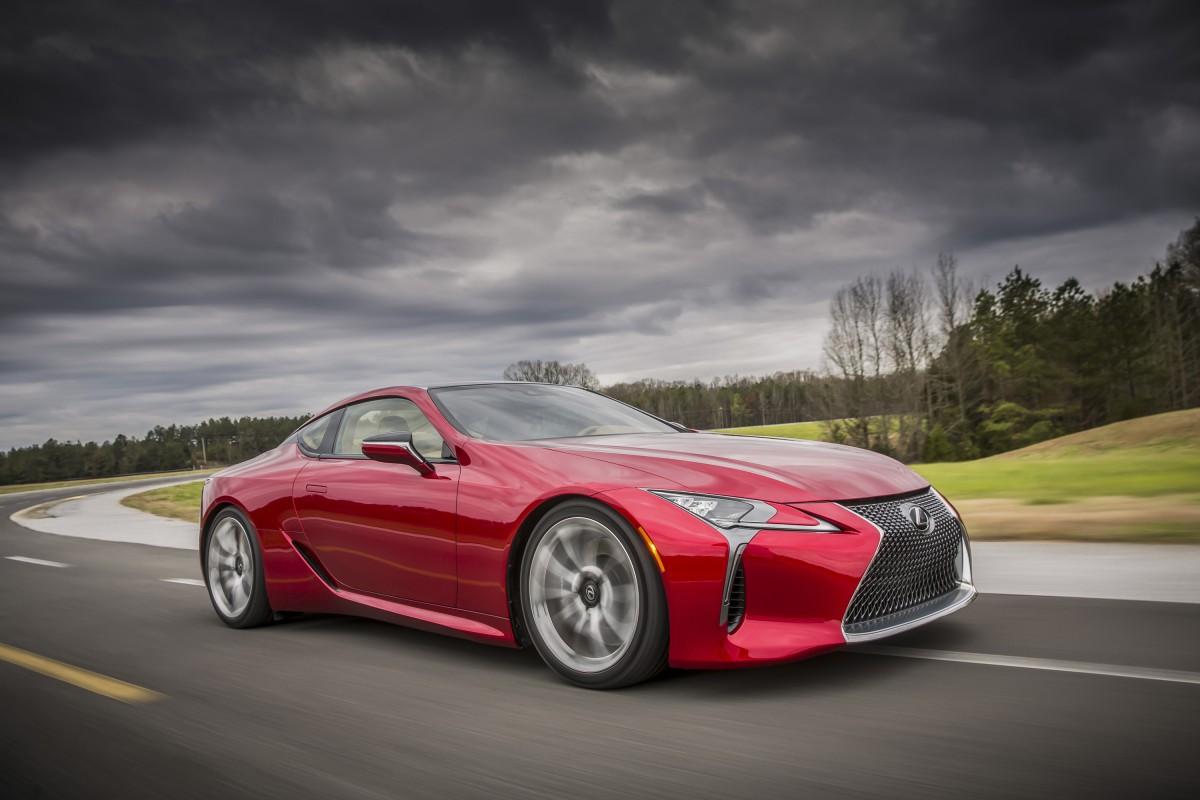 LC 500 has the first successful application of the Lexus “spindle” grille. LC 500’s exterior forms echo the spindle, carrying its lines from spindletop across the hood and fenders into the roof. In this case, the spindle is not forced, not grafted on to an existing design. The spindle works best when not too tall, and as a single frame, with an unbroken grille. Some Lexii split the spindle in half and have sharp radii to better fit an existing design. Here the spindle is as intended, a new take on the old gaping maw. If you have imagination, it might be the mouth of a terrible creature of the deep dark sea. 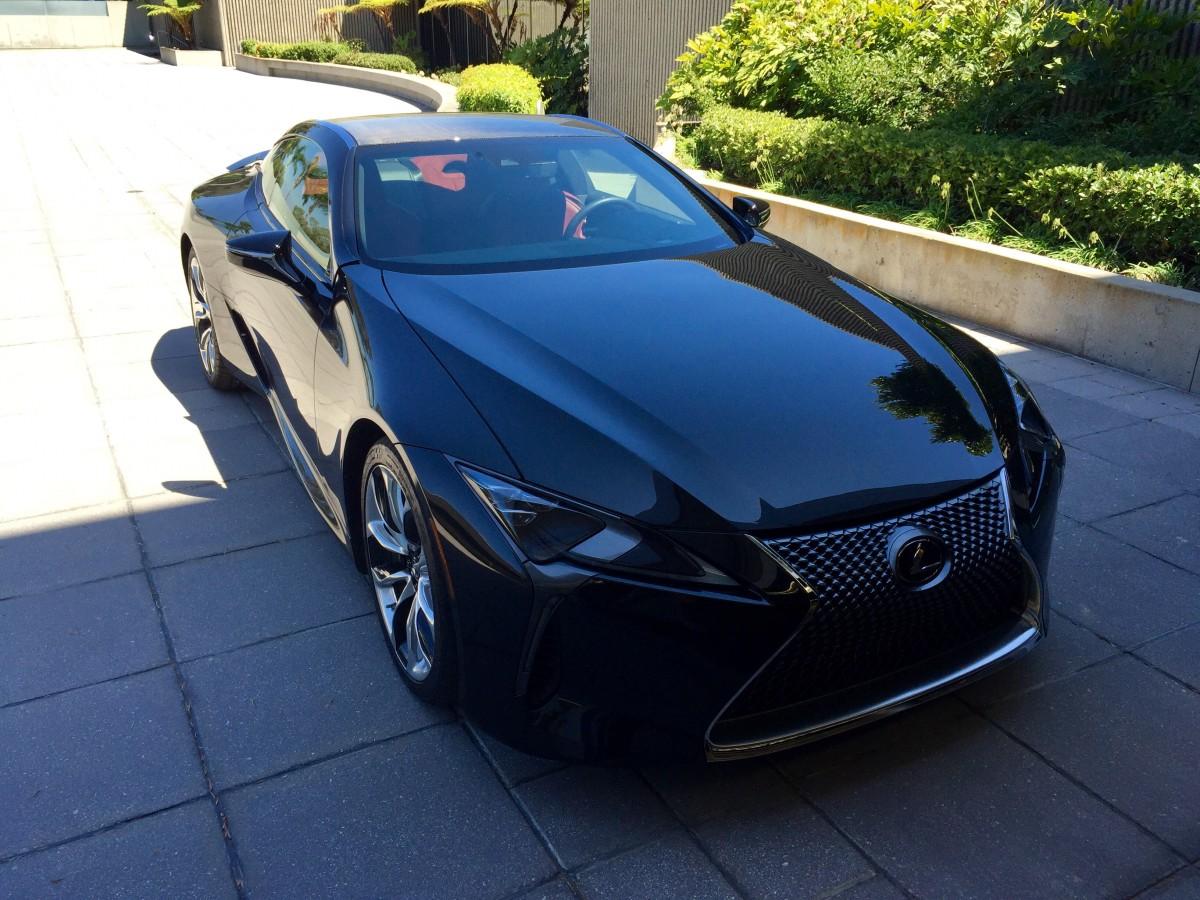 Pre-production LC 500 at Calty design. Note how the spindle lines are carried across hood and fender and up into the roof. The spindle is no longer grafted on.

LC 500 lost almost nothing in translation from the 2012 LF-LC concept vehicle to production-ready coupe. In fact, in all but a few ways, the production car body is better looking than the show property. 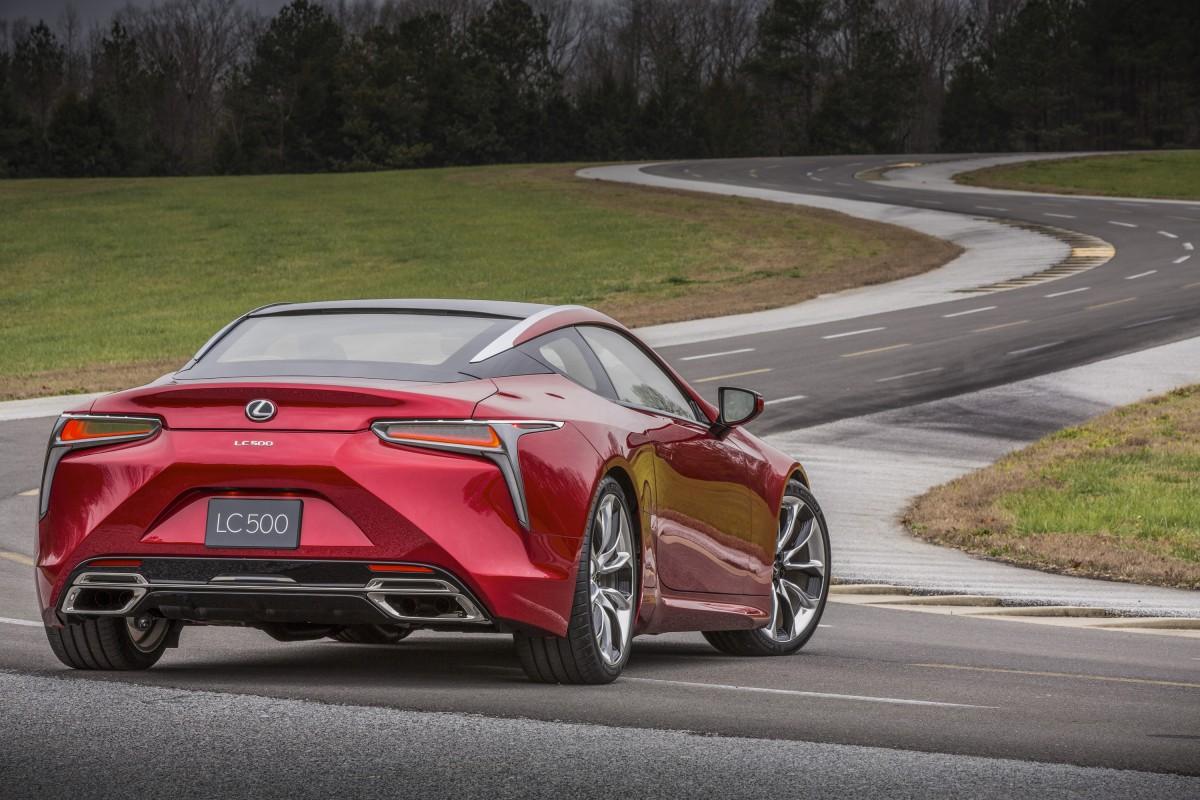 LC 500 is based on the all-new Lexus large rear-drive engineering architecture and toolkit, known as GLA. It is completely unrelated to the IS/GS/RC small-vehicle architecture. The biggest compromise forced by use of this large-vehicle architecture? Cowl height, meaning the height of the dash, the height of the hood. Lexus engineers labored long and hard to drop the cowl height several inches, and the end result is roughly comparable to the BMW 4-series and Mercedes C-class coupes. In other words, LC 500 is not a sports car with a very low dash panel, but instead a handsome coupe. 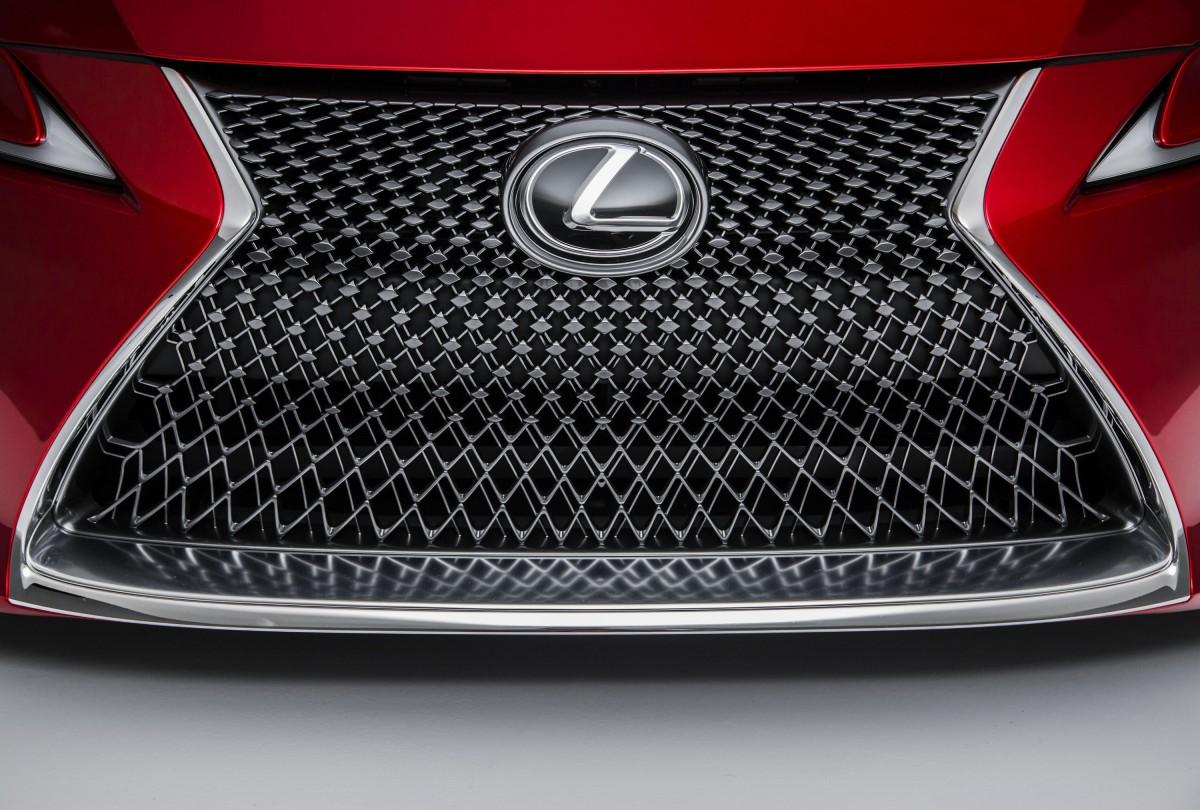 The most successful application of the Lexus spindle to date. The lower sill is deep and attracts the eye. The entire single frame is more elegant and curvaceous in person than in this perfectly rendered image.

Very low door tops and side mirrors help mask the height of the cowl, as do the sweeping lines across the hood and fenders that resolve at the flying rear roofline. More so than this visual trick to hide the cowl height, that floating rear roof pillar is an exceptionally well done tromp l’oeil, trick of the eye. At ten paces the rear roofline does seem to hover, suspended in mid-air.

Rear roof pillar appear suspended in air, as if pulled back with the “speed” of the car.

Inside, the LF-LC’s exaggerated curling surfaces that were inspired by a lily the designers scanned into a digital 3D element are now greatly muted, a faint echo of the concept car interior. You see delicate curve of the lily petals in the center console’s passenger grab handle, and in the door panels, but this is a sensible production vehicle, not a flight of fancy. Exotic as it was, the concept car interior was simply too wild for production. 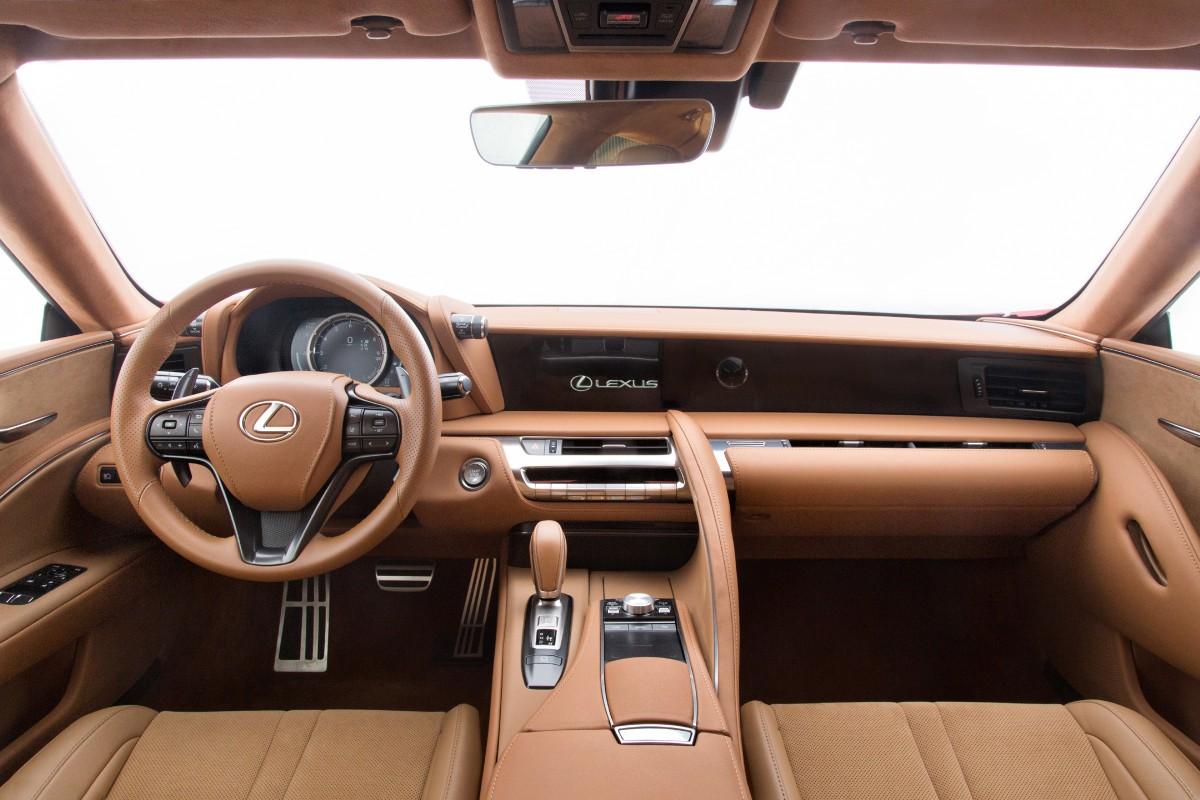 Based on my ten-minute look at panel gaps and shutlines of the pre-production LC 500 on display at Calty, Toyota’s advanced design studio in Newport Beach, and another ten minutes spent fiddling with interior dials and inspecting fit and finish, LC will maintain the most important attribute of any Lexus: impeccable build quality that leads to low maintenance costs, long-term reliability and the enviable owner loyalty the brand has enjoyed since its launch in 1989. I have steered more than a few women into Lexus RX350 ownership, and not one of them ever complains about the vehicle or the dealership. Perhaps excepting the LFA supercar and the recent F-models, no one has ever bought a Lexus for high style or performance. They’re the most practical luxury cars available, in most cases bulletproof daily drivers, and excepting the last few years before Akio Toyoda took over, silky smooth and eerily quiet. In LC 500, one should get Lexus quality and reliability joined with a good dose of high fashion and performance. For years I’ve hoped Lexus would develop a consistent design vocabulary, but they were always evolving. Not until the last generation of cars was a consistent approach developed.

As a “boy editor” in 1989 I attended the initial launch of the Lexus brand held at the Ritz Carlton Laguna Niguel, hosted by Toyota USA’s great leader, Bob McCurry. I have seen and driven most Lexii since. It’s satisfying to see how Lexus is finally starting to evolve and develop character beyond quality and silence. LC 500 should retain the flawless quality of the conservatively designed and decidedly unsporting cars of the brand’s first 20 years but wrap that in much more stylish clothes, with an engine that will shout when you stand on the throttle. Again, we shall see if the soup tastes good in the coming months. 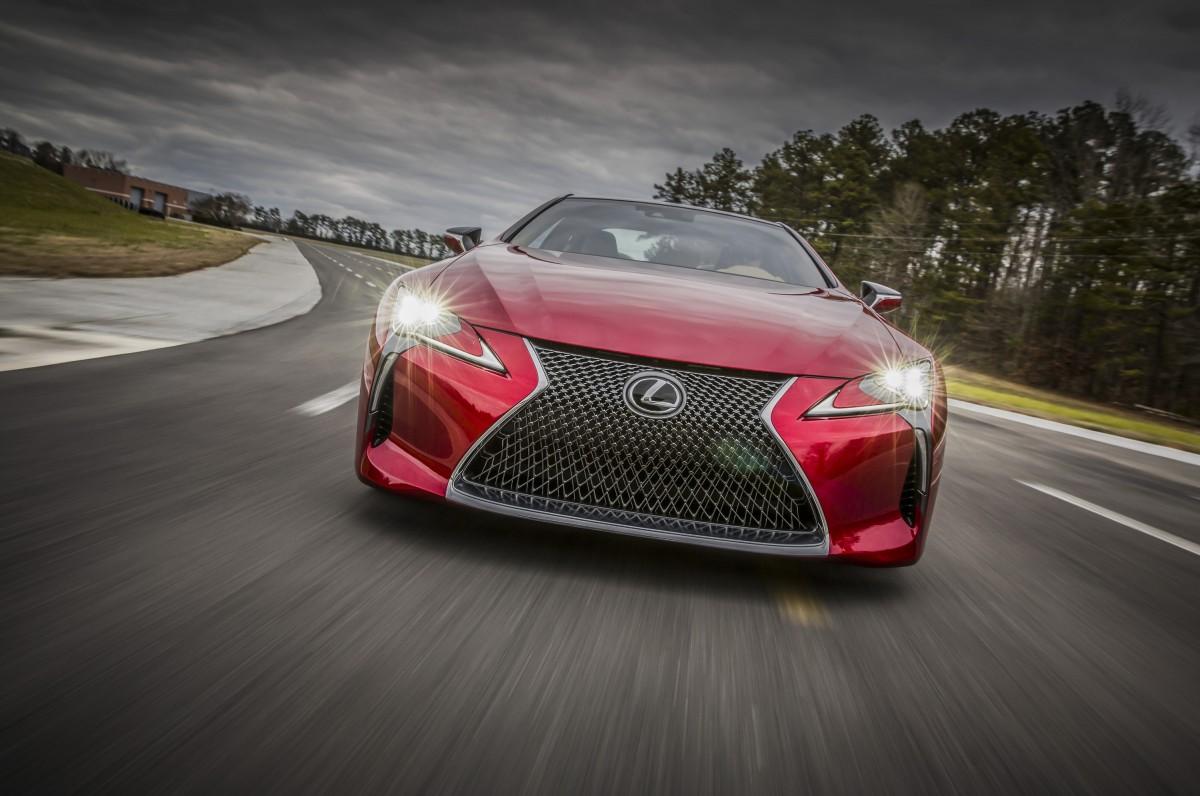 Though LC 500 will have all the electronics and various calibration choices and certainly the horsepower of German rivals, in daily life LC will prove the less hard-edged alternative to a BMW M4 or Mercedes-AMG C63 Coupe. In top spec, LC 500 will have the 467 horsepower 5.0-liter V8 found in the RC F and GS F paired with a newly developed 10-speed automatic transmission. Its selling point will be performance that is almost equivalent to the BMW and Mercedes-AMG combined with Lexus long-term reliability and likely a good dose of long-distance comfort. Think of it as an Aston Martin Virage with Japanese quality and practicality, a big GT that will serve as an every beat-around-town driver just as well as a long-distance tourer. 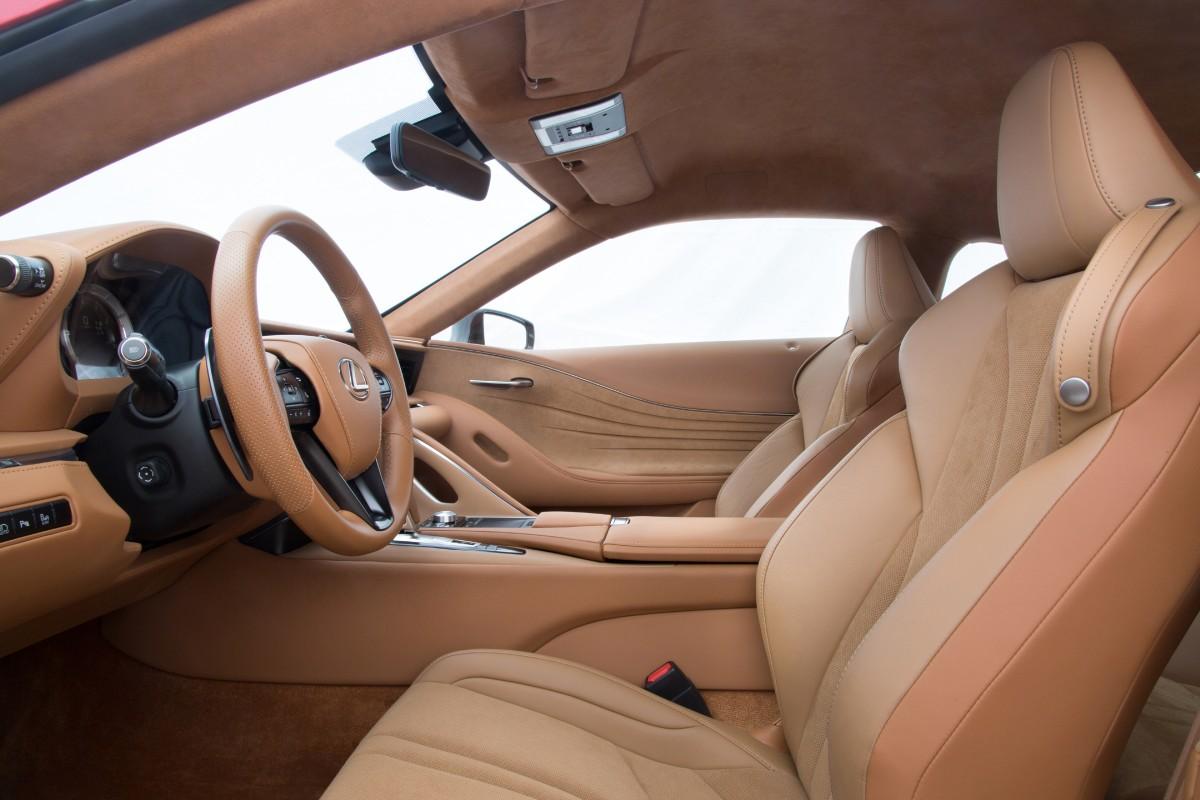 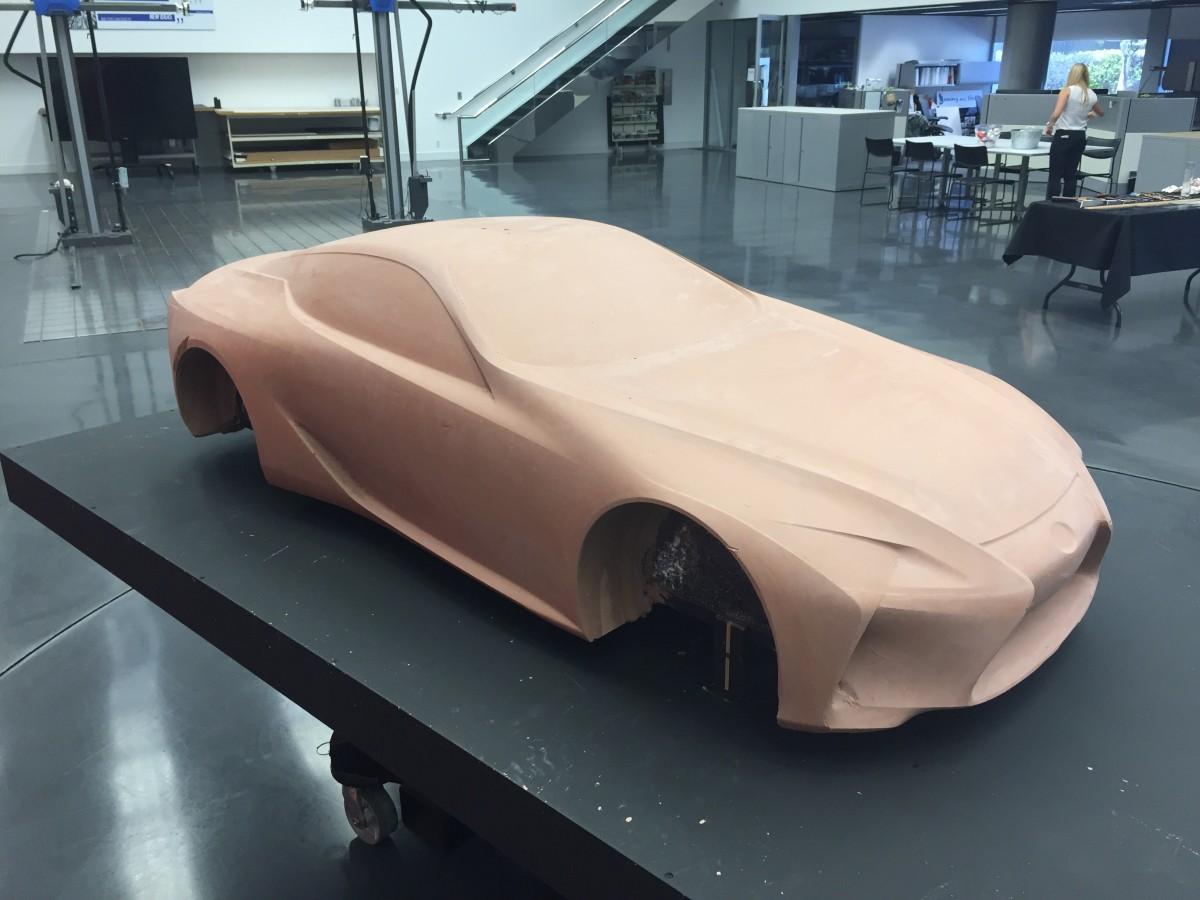 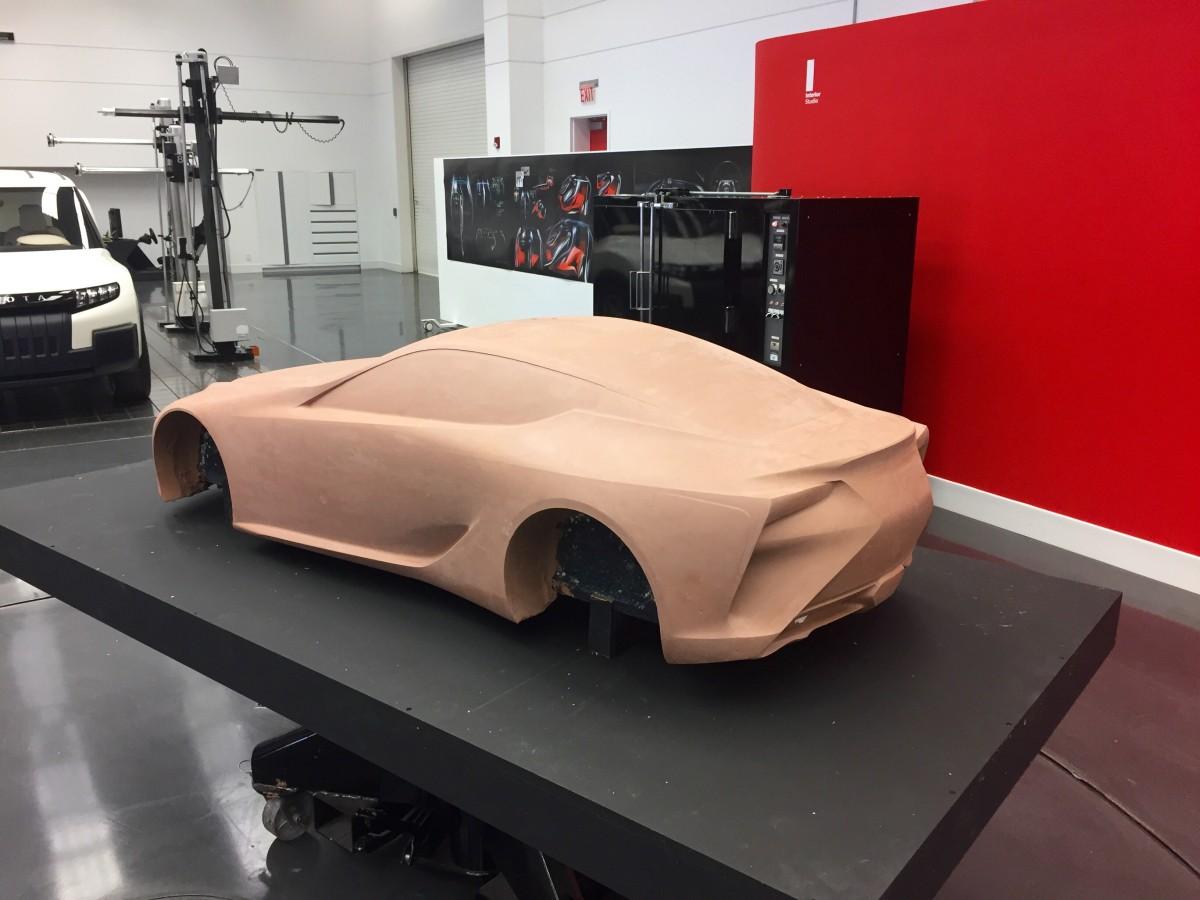 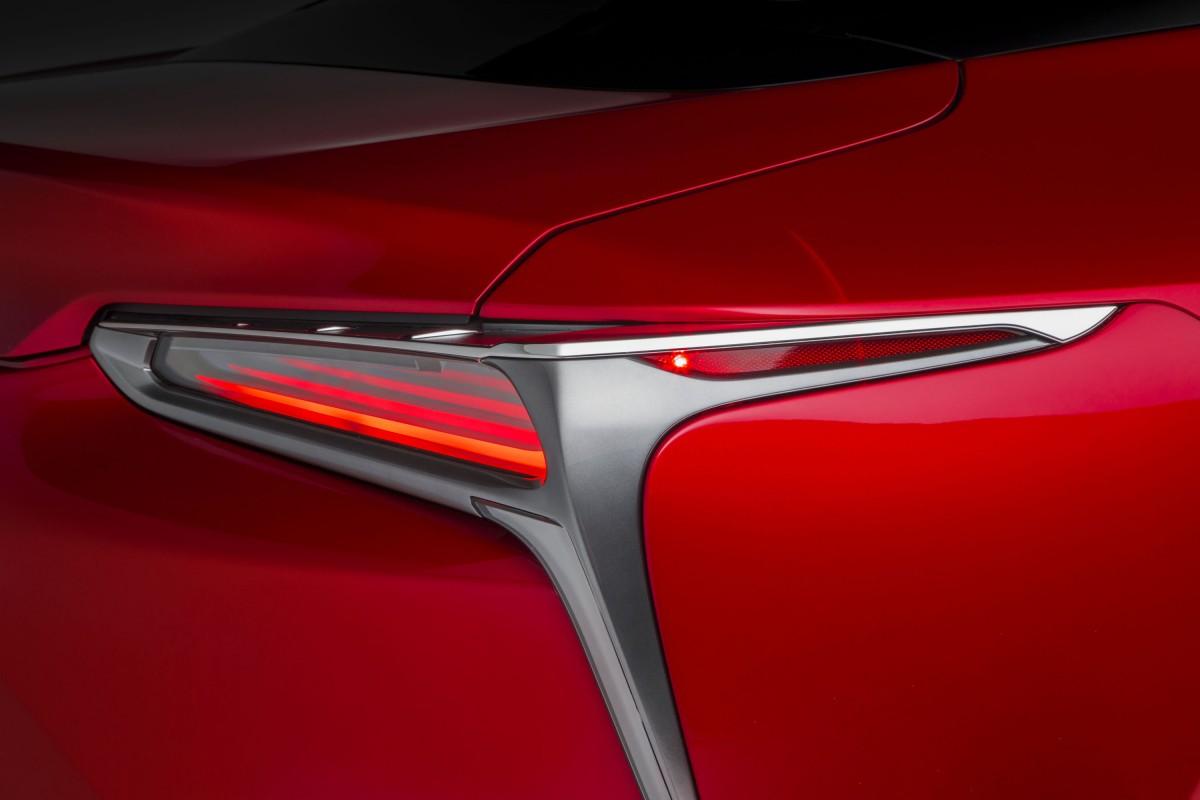 Many of the fine exterior details have not only carried over from the concept car, but have improved. 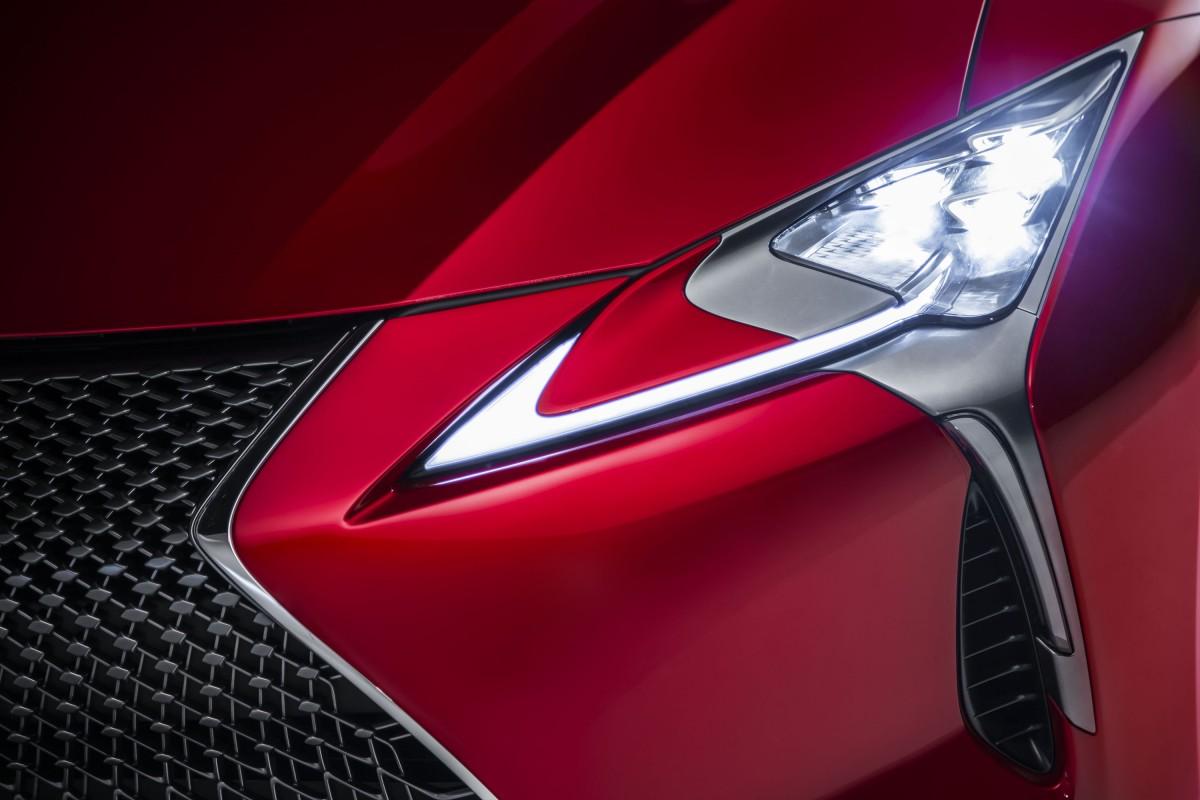 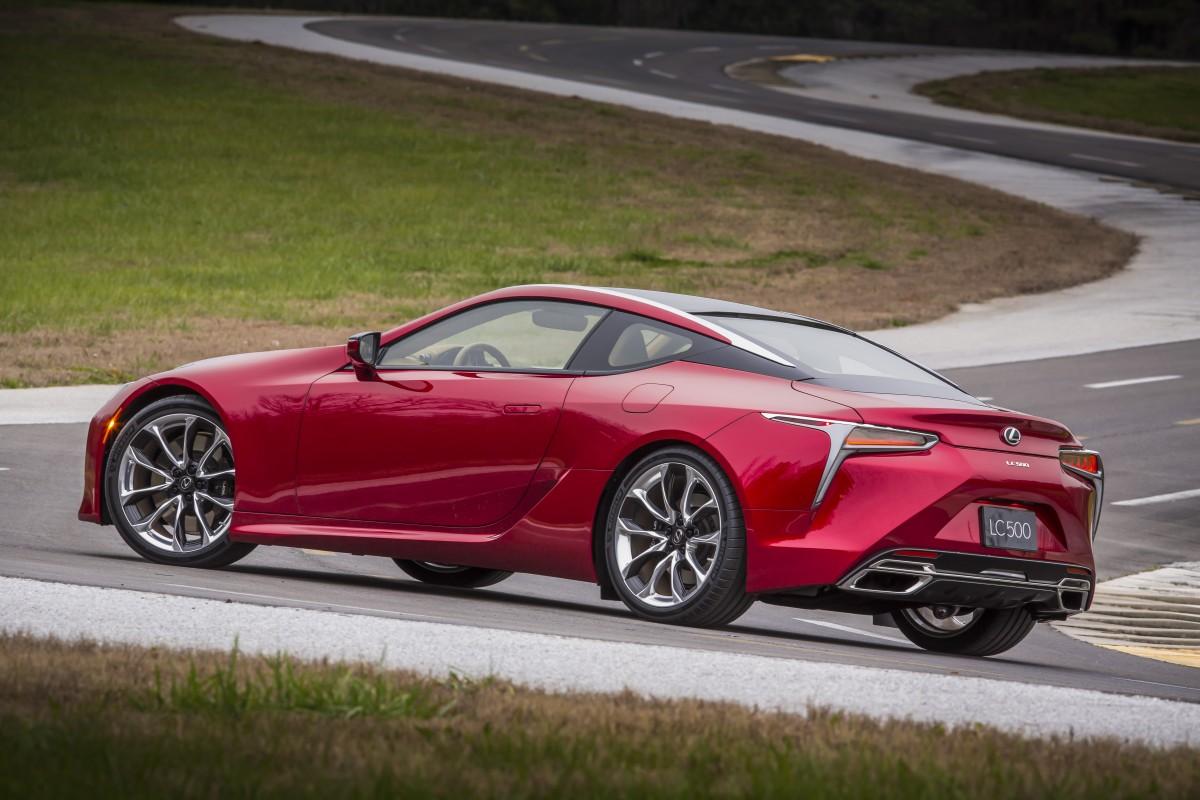