A new Lexus LC 500 accelerates on a twisting mountain road and as it passes, its thrilling engine note shatters the rockface to reveal a battery of pounding pistons and spinning gears.  In another scene a face in the mountain side turns to watch the car speed by. It’s an amazing spectacle to herald the arrival of Lexus’s flagship coupe, the result of a ground-breaking film-making project that has shunned CGI trickery in favour of real-world projection mapping artistry on an unprecedented scale. 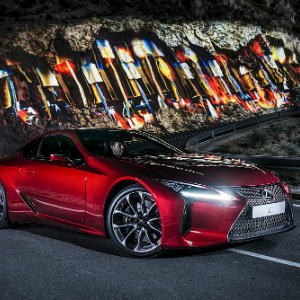 The LC 500 coupe enjoyed a sensational debut earlier this year as the stand-out star of the Detroit motor show. Now the dynamic brilliance of its design and engineering are being celebrated in a short film that helps build anticipation towards the car’s market launch next year.

In the same spirit of Lexus creative innovation that delivered the Origami-inspired IS sports saloon replica and the fully functioning ice wheels crafted for the NX crossover, the beautiful LC is celebrated in a film that pushes the boundaries of cinematographic techniques. The aim is to give viewers an immersive visual and aural introduction to the LC, before they actually experience the car in the metal.

Shot in a remote area of Spain’s Sierra Nevada mountain range, the film brought together the talents of leading motion designer Edgar Davey and a team from projection mapping specialists QED Productions, led by Paul Whigfield. Davey produced a set of visuals that takes the viewer under the skin of the LC 500, evoking elements of its 467bhp V8 engine and its world-first 10-speed transmission. He had to be sure each could be faithfully rendered when projected against the jagged mountainside – the film’s natural backdrop and the canvas for Davey’s artistry – requiring precise positioning of each camera and projector.

“It’s not usual to get a brief like this,” he said, “it was so ‘out-there’ that we were breaking new ground.”

The filming required a team of 20 working on location. Equipped with four of the brightest projectors in the world, they had just three nights in which to translate Davey’s visuals into finished footage. Whigfield explained the scale of the challenge they faced: “I don’t think this would have been possible a year or two ago, it just wouldn’t have been a practical proposition. I would have been easy to try and fake something like this, but to do it for real is such an incredible challenge” Multiple projectors had to be linked to create a seamless backdrop of images moving over the mountainside, timed to synchronise perfectly with the LC 500 as it powered along the twisting road. As well as the evocative projections, the film also focuses on some of the design and engineering features that define the new coupe, such its arresting bodywork design, carbon fibre roof and retracting rear spoiler. Inside the car, craftsmanship detailing such as the stitching of the suede-effect Alcantara trim and the sculpted surface of the magnesium gear shift paddles, is contrasted with the hi-tech appearance of the 3D instrumentation that greets the driver when they fire up the engine-start button.

“Nothing of this scale had been done before,” said Davey, “and it was a challenging event just to think about. But in the results, it happened like magic.”

The new LC 500 makes its UK debut at the Goodwood Festival of Speed this Thursday and will go on public sale early next year.