8 things you should know about the Lexus LC 500h powertrain

Lexus unveiled the LC 500h today in The Netherlands, and I got to take a look inside its new hybrid system. On one hand it seems like a box of magic – it combines two seemingly incompatible transmission types into one package. But that’s also the ingenious simplicity of the thing. We don’t have all of the details on how it all works yet, but here’s a rundown of the high points.

Efficient business in front, low-key party in the back.

What makes it all work is the mullet of transmissions. For the new hybrid transmission, Lexus used the Toyota Hybrid Synergy Drive/Lexus Hybrid System – which consists of an e-CVT with a planetary gearset and two electric motors (one for charging the battery, the other for motivation and regen) – and grafted a conventional four-speed automatic onto the back. The two units actually coexist in one package, with the e-CVT making things efficient and the automatic expanding the capabilities. So at the low end, the system can deliver more torque, and the engine can also run at lower rpm on the highway. It’s all thanks to those fixed gear ratios, and it’s surprisingly simple. 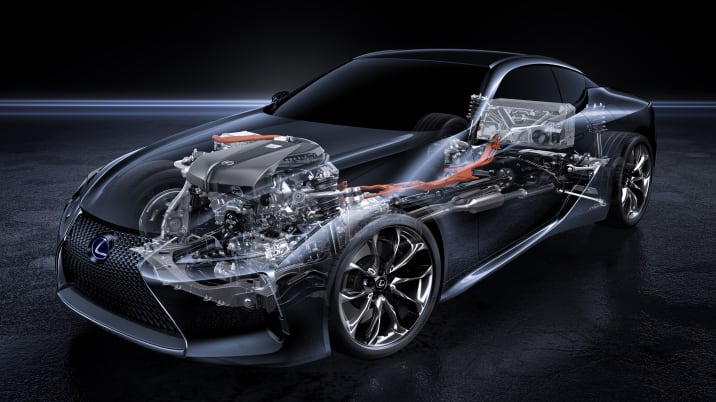 Except it’s not that simple.

This is where the virtual gear ratios come in. Like current Lexus hybrids, the system has ratios it can call up with the e-CVT. In this case, there are six virtual ratios to complement the four real physical ratios, for a total of 10 “gears” at the transmission’s disposal. (Not coincidentally, the V8 LC 500 coupe has a 10-speed automatic.) One of the four fixed gears is always engaged when the car is moving, so the 10 ratios come about from combinations of what the e-CVT in front and the automatic in the back are doing. In other words, all 10 ratios are variations on the four fixed gear ratios, which means that all 10 gears could be considered virtual.

It won’t use all the gears all the time.

In Eco mode, the car will start off on electric power and skip the first couple of “gears.” When it’s set to Sport or Sport +, the engine will be engaged from a stop and the transmission will select the lowest ratio. The sportier modes will also ignore the top couple of gear ratios. 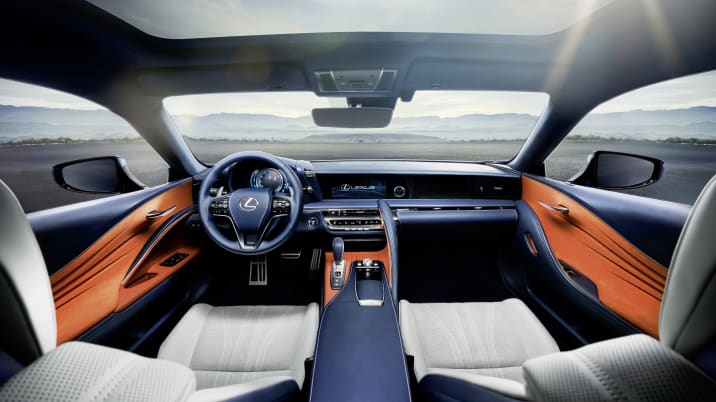 It can drive faster with the engine off.

In a Lexus GS 450h with the Lexus Hybrid System, for example, at speeds above 62 mph or so the engine has to start up. This is because something needs to take up some slack from the battery-charging motor-generator or else it will start spinning too quickly. With the engine running, that motor-generator can slow down and just use the engine power to charge the batteries. In the Multi Stage System, the addition of the fixed gears means the gas engine can stay shut off up to wheel speeds of about 87 mph. That means highway cruising without the engine running.

Engineers were able to offset the added weight of the four-speed automatic by downsizing the motor-generator and switching from a nickel metal hydride battery pack to a lithium-ion one . The battery has about the same power output as before, allowing the car to drive for a mile or so in EV mode, depending on the traffic situation.

While the now-defunct Global Hybrid Cooperation’s two-mode transmission sounds similar to this (three planetary gearsets, two electric motors, acts like an automatic), it was more akin to a conventional auto with two electric motors and a whole lot of computing power added. This new Lexus system builds off of the e-CVT that Toyota has been putting in hybrids for almost two decades. The biggest difference from the basic e-CVT is that here all output flows through the fixed gears, whereas in the standard e-CVT only power from the second motor-generator goes through a gear reduction. So in the Multi Stage Hybrid, the gas engine also benefits from physical gearing. 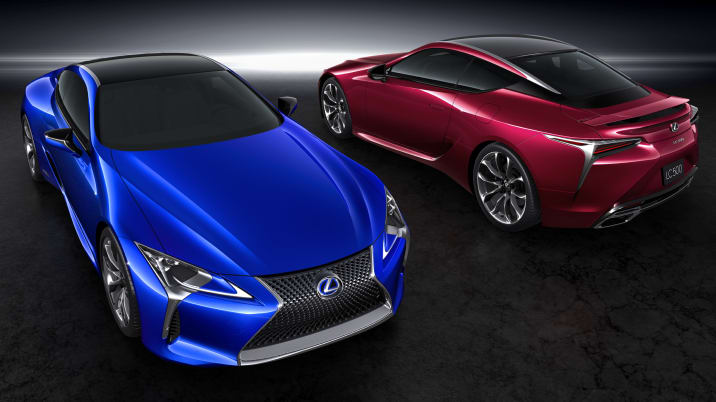 You’ll see it in other Lexus models soon, and maybe some Toyotas.

The next LS sedan, which will share the LC’s new architecture, is a given application for the multi Stage Hybrid System. We expect it will show up in the GS hybrid at some point and perhaps a future IS or RC hybrid. It makes less sense in a Prius, where all-out efficiency is favored over performance, but we could see it in a future Toyota sports car (like that Supra we hope Toyota is developing with BMW) or maybe something big like the Highlander. The issue with putting it in something front-drive-based is packaging, as the transaxle would need to grow by the length of the automatic portion, but Toyota recently improved the Prius’s transaxle by replacing the e-CVT’s planetary gearset with a parallel-gear arrangement. We could see a similar trick employed to put this system into other cars.

The LC is just as gorgeous as a hybrid.

Especially in the blue paint we saw it in today, this is a stunning car. The only visual differences between the LC 500 and LC 500h will be the hybrid’s blue Lexus badges. Everything else stays the same, down to the wheels and tires. No low-rolling-resistance rubber here, thankfully, although Lexus did choose run-flat tires to avoid adding the weight of a spare tire. And we’re told the hybrid system can easily overpower the grip of the rear tires, something Toyota engineers aren’t used to. We’ll be sure to test that feature extensively once we get behind the wheel in a year or so.