Luxo crossovers have been around for nearly two decades, and in this segment, Lexus was a pioneer.

The RX, which launched here in 1998, plumbed the middle ground between car and SUV, offering ride and handling like the former, but with the surefootedness and utility of the latter.

It was a hit, not surprisingly, and continues to be the marque’s top-selling model.

But nearly every automaker has joined the fray, and the crossover has evolved. Just Google an image of the first-gen Lexus RX and you’ll see what was ground breaking then would be considered ordinary today.

Mechanicals and tech aside, the styling bar has risen, and most contenders – BMW X5, Audi Q5, Lincoln MKX, Mercedes GLE – have grown more handsome, even more daring, with each redesign.

But perhaps the edgiest today has typically been the most cautious among them. Lexus is known for playing it safe, but recent efforts have shown they’re willing to shake things up.

The fourth-generation RX is more sculpted than any previous design, wearing harder edges and more acute angles than its competitors. This includes an even bolder spindle grille, flanked by sharper-cut LED headlamps.

From the side, the partially blacked-out C-pillar creates a “floating roof.” It’s an idea that has worked well for Nissan Murano, and in the RX it visually shrinks the pillar’s size.

Mind you, it doesn’t aid rear visibility, which for most of these vehicles is limited by rising beltlines, sloping rooflines and relatively small rear windows. The RX’s steeply raked hatch and whopping roof spoiler add to this challenge. 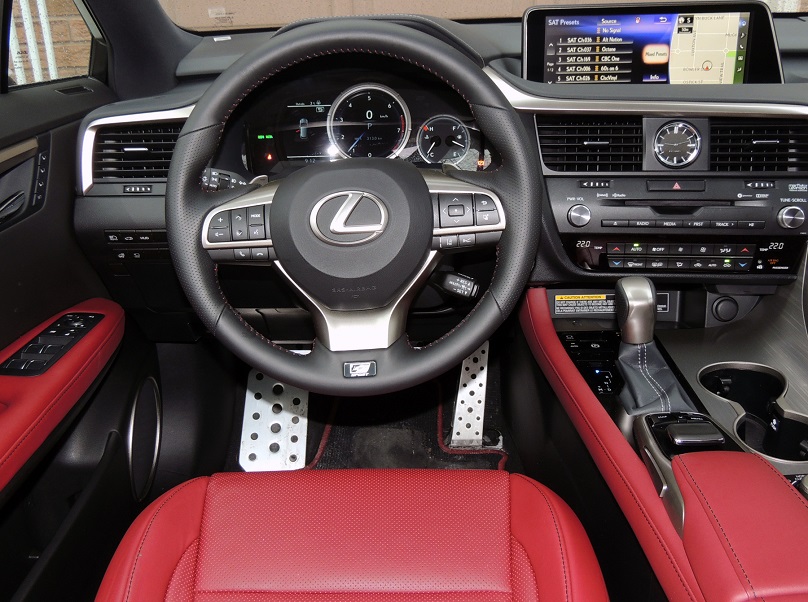 Another casualty of the sleeker RX is a smaller cargo hold, which drops from a maximum of 2,273 litres (with the 40/20/40 rear seats folded) to 1,594. But the luxury buyer may not be overly concerned with how many bags of mulch his or her CUV will schlep home from the garden centre.

Cargo carrying is still reasonable, but more importantly, passengers are treated to an interior that’s as good – if not better – than anything in its segment. Particularly in F Sport trim, which came with rioja red leather F Sport seats: 8-way power heated/ventilated buckets in front and power 40/20/40 bench in back. 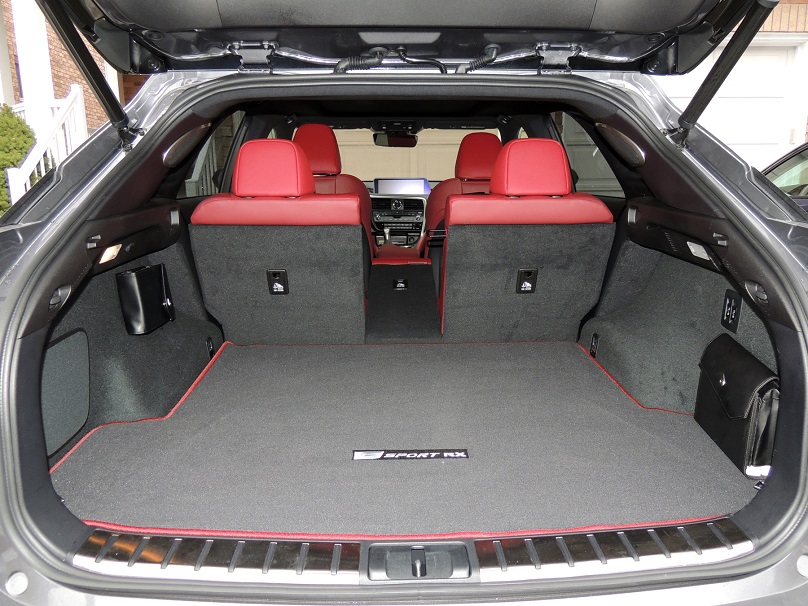 I like the widescreen display, but will admit the remote-touch can be a bit fiddly in a moving vehicle.

Other pluses include the touch-free power hatch (just place your hand over the Lexus logo), and the power-folding rear seats. All the above allowed me to slide in an armload of signs without first putting them down in the slush to fiddle with seat levers and straps.

Of course, you don’t need to drop $68,400 for a top-trim F Sport Series 3 or the same for the Executive Package to get a well-equipped RX. 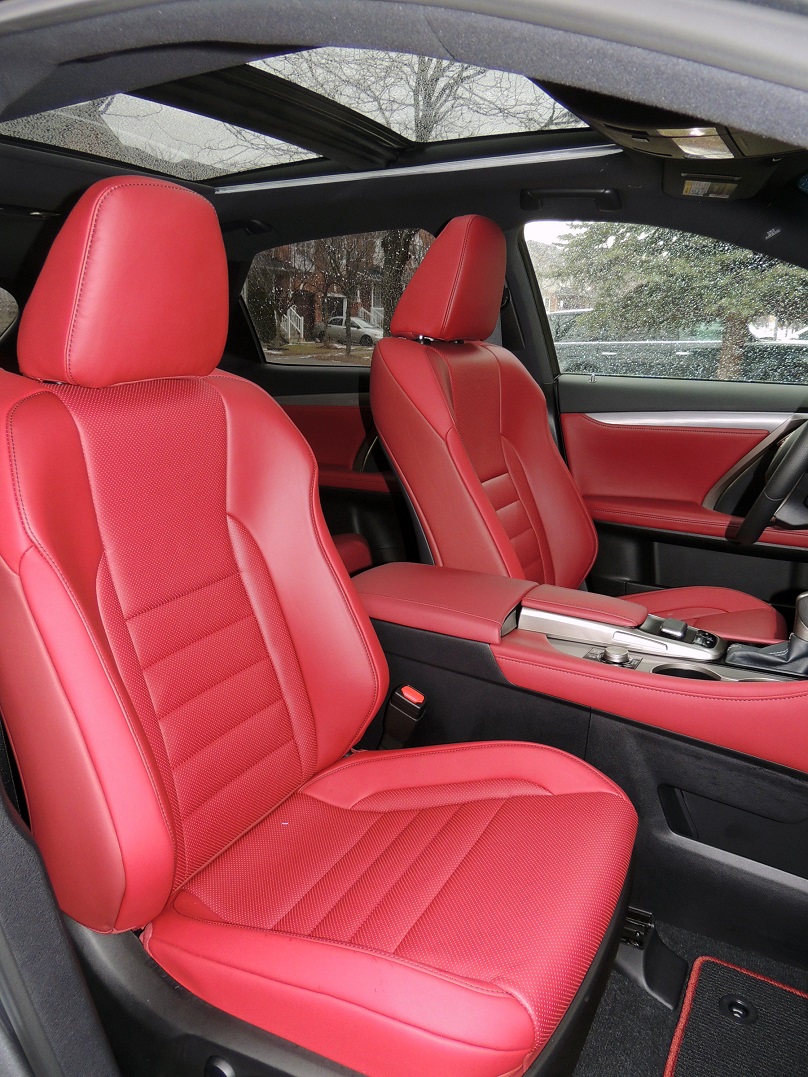 Basic RX models roll on 18-inch alloys, but all now get dual exhaust finishers – unlike the single pipe with the last model. 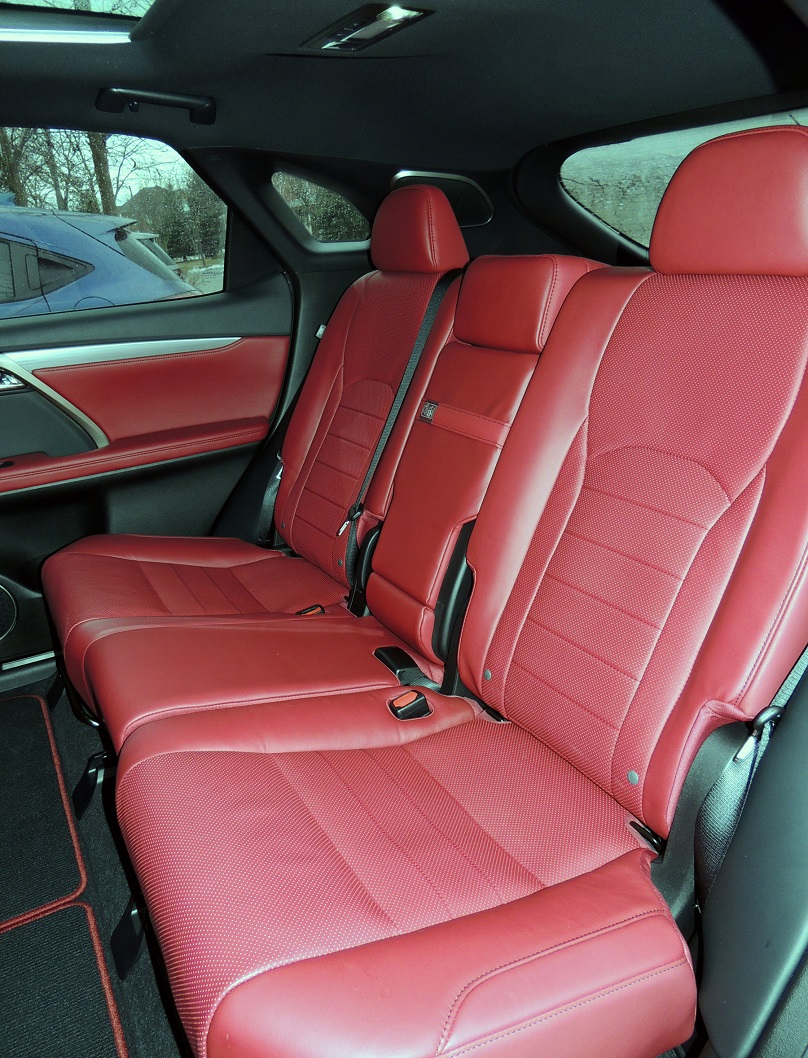 It is mated to a smooth-shifting eight-speed automatic transmission.

Not to mention Sport mode, which was my “go-to” setting. Enable it and throttle response sharpens, along with later shifts for better acceleration. Sport+ tweaks the steering for better feel, and the suspension firms up for better handling.

Use it with or without manual shift and this heavy vehicle behaves more like a sports sedan – albeit a pretty big one. 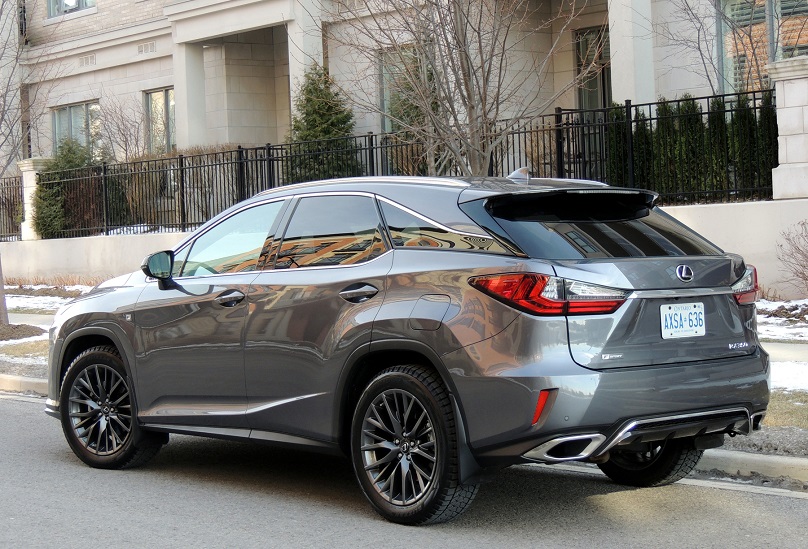 The RX can be surprisingly nimble in the cut and thrust of suburban and highway traffic – quick off the mark and equally responsive when you need to merge or pass. And the F Sport’s adaptive variable air suspension keeps the vehicle planted in hard cornering.

Some consider crossovers a compromise, but I’d suggest that today’s models offer the ideal blend between car and sport utility. And the RX, which has arguably paved the way, continues to challenge the best in its segment.