Since its introduction in 2012, the current-gen Lexus GS has certainly made its mark in the large luxury sedan segment, with its sharp styling and superb, well-balanced driving character. Some refreshments have now been made for the 2016 model. Chief among which is the introduction of a new turbocharged engine.

Before we get into the finer details we’ll cover some of the basic stuff so you can understand what this vehicle is exactly and where it fits into the lineup. The new GS 200t is pretty straight-forward actually. It’s the replacement to the previous GS 250 base model, which used a thirsty old albeit silky smooth 2.5-litre naturally aspirated V6.

You needn’t worry about the ‘200t’ name, which suggests a 2.0-litre turbo four-cylinder. It might only be a four-cylinder but it produces 180kW and 350Nm. Compared with the old 2.5-litre V6’s 153kW/253Nm output, it doesn’t seem so bad after all. The main reason for the switch to a downsized turbo is purely for improved emissions and fuel consumption. The new 2.0L uses 8.0L/100km on the official combined cycle test while the 250 gulped 9.3L/100km.

As usual, the 2016 GS is available in various trim levels that each package together a distinct theme. Here we’re testing the F Sport version that comes with a number of racy details. Prices start at $83,000, up from $80,110 of the GS 250 F Sport predecessor.

Lexus interiors of late have become positively modern and innovative, with cool shapes and exquisite textures and details employed in every area. Compared with the boring and very conservative German rivals, the GS interior design and layout is definitely the most attractive and most interesting.

For 2016 some minor updates have been implemented. The driver now views a 4.2-inch digital display within the instrument cluster, with changeable display themes for Sport and Eco driving modes. It’s a great system that can be toggled through so you can view various readouts, while showcasing a motorcycle-like circular dial in the middle.

Lexus’s Remote Touch controller has also been updated to include side selection buttons on the hand rest, along with a full-screen map display option. This F Sport version misses out on the full-size 12.3-inch wide-screen LCD, instead making do with an 8.0-inch, squarer display. It still comes packed with plenty of applications though, including sat-nav, digital radio, dual-zone climate control with pollen and humidity aids, and a 12-speaker stereo.

We don’t know what Lexus has done with its stereos but the latest systems by Mark Levison have certainly been tuned for much improved quality over the previous setups. It now produces very clear and crisp sounds, with impressive bass if one so desires. During our usual max-volume test it blew out 104.8 decibels on our dedicated gauge – the highest recording we’ve seen so far (since commencing decibel tests a few weeks ago). 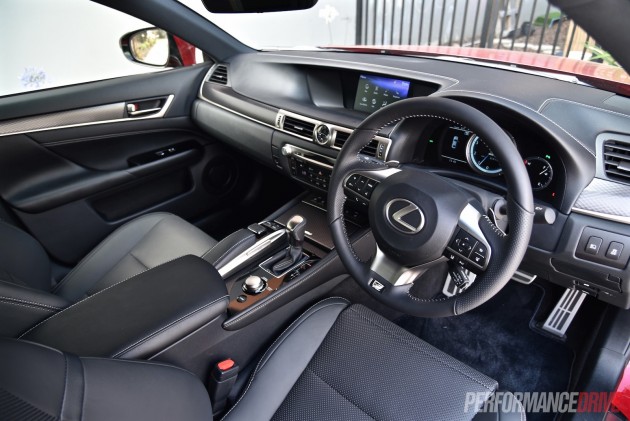 As before, the GS F Sport is equipped with magnificent sports seats in the front that can be adjusted in almost infinite ways via power controls. The driver’s seat also comes with a hugging function so you can tighten in for the corners and then deflate the lateral bolsters for more relaxed conditions. Both front chairs come with heating and cooling functions as standard, the latter of which is perfect for hot Australian conditions, with air-con air oozed from the perforated leather.

In the back it is just as pampering, with ample legroom providing a limo-like setting. There is a flip-down armrest/console, however, the F Sport misses out on the separate climate control module which sits in higher variants. Climate control vents are conveniently placed on the back of the main centre console though, with a power outlet down below.

We love the soft leather Lexus uses on its vehicles. It feels more comfortable and luxurious than the perhaps more durable yet less-appealing stiff leathers featured in the European rivals. We’re not too fussed about the new diamond-pattern trimming introduced with the 2016 model, even though it does seem classier than plain piano black plastic or fake wood, for example.

As for exterior updates, Lexus has revised the front end a touch with the new model, fitting a bolder spindle grille, new alloy wheel designs, and very cool bi-LED headlights. The headlights are fantastic during night driving, spraying out a super-fine and defined light pattern onto the road ahead. 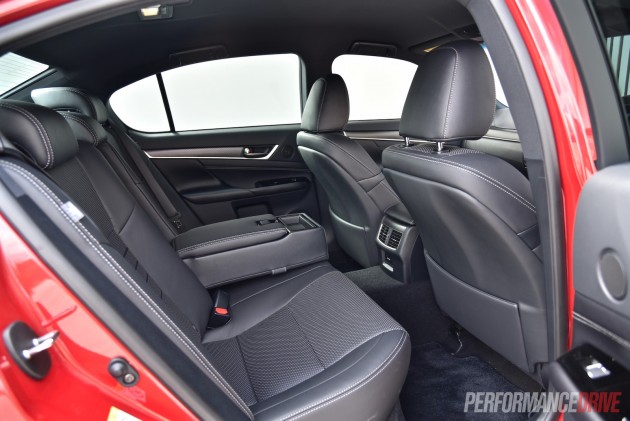 Firstly, let’s make some quick comparisons with the previous GS 250 in terms of the engine’s overall performance. Lexus quotes a 0-100km/h time of 8.6 seconds in the 250 and 7.3 seconds in this new 200t. We achieved 7.48 seconds (in hot conditions), and a quarter mile in 15.47 seconds. Peak torque, almost 100Nm higher in the 200t, now spans across a wider rev band. It’s available from 1650rpm to 4400rpm, comparing favourably with the 250’s static 4800rpm peak. Simply glancing at these facts easily justifies Lexus’s switch to a downsized engine.

The engine is very quiet but probably not as quiet as the old V6. We recorded a peak decibel 0f 75.4dB during maximum acceleration in the 200t, and a whisper-quiet 39.7dB during air-con-off idle. Of course, the downside to this is an unexciting driving personality in terms of pure aural pleasure. It’s not the nicest-sounding 2.0-litre turbo, emitting a subdued and somewhat bland low-pitch roar.

You don’t have to push the new engine to get up to or maintain speed like you did with the old 250. Inherently, turbocharged engines like to carry a gallop once up to speed, so it is ideal for a luxury car like this and it also helps to optimise fuel economy. It also means overtaking is a breeze, only requiring a gentle prod of the throttle to wisp past other road users.

Thankfully, Lexus hasn’t given the GS 200t a CVT automatic transmission. Instead, it gets a fantastic eight-speed sports automatic with multiple modes and paddle shifters behind the steering wheel. Using the paddle shifters in Sport Plus mode returns a very enjoyable driving experience. It makes you feel quite involved and engaged with the journey, and the gearbox responds immediately to your paddle inputs.

In normal drive mode however it does feel like there is some turbo-lag, or delay from the transmission. It doesn’t exactly zip off the line, even if you’ve asked it to. The engine spins up revs but there is a noticeable pause before the full torque is felt. Driving in Sport or Sport Plus mode does seem to help.

Like before, the GS F Sport is a wonderfully balanced and enticing machine to drive down a twisty mountain road. Lexus has revised the front dampers for a more direct feel with the update, and the GS 200t uses a Torsen limited-slip differential. As hard as we tried it is virtually impossible to provoke oversteer. The clever diff has to be credited for distributing the power in such a dynamic and controlled way. It allows you to use the throttle to pivot the car around a bend, particularly tight bends, without wasting away progress with wheelspin or sliding off course.

Despite weighing slightly more than the GS 250 – 1705kg vs 1680kg (tare) – the GS 200t maintains the natural composure and handling prowess of the latest-gen GS. It is a true driver’s car. Part of this is thanks to the communicative steering, which is very precise and progressive. You can pinpoint the front wheels, and understand exactly how the rear tyres are reacting.

This is very much so one of those vehicles that you can commute to work with during the week and also enjoy a spirited drive on the weekend. As a bonus, the real-world fuel consumption is respectable for this type of vehicle. We averaged around 9.5L/100km during our test in mixed conditions. 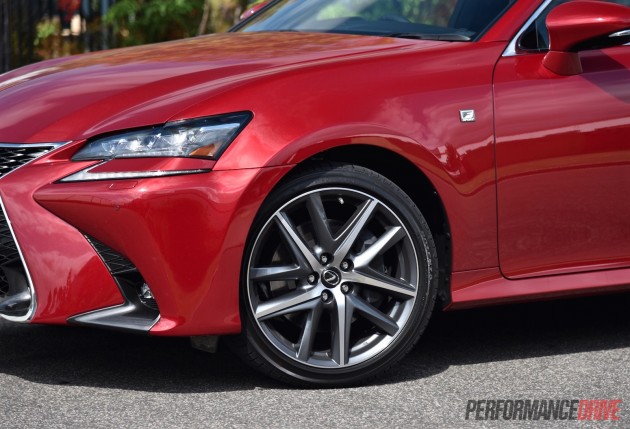 The GS 200t is definitely a good thing. It’s a natural progression for the company, especially as the old 250 V6 was starting to lack in power and efficiency in these modern times. Switching to a downsized turbo allows the GS to thoroughly keep up with the class standards. Best of all, the 200t is more powerful, quicker overall, and more efficient than the 250, while maintaining the same great driving dynamics it is renowned for.